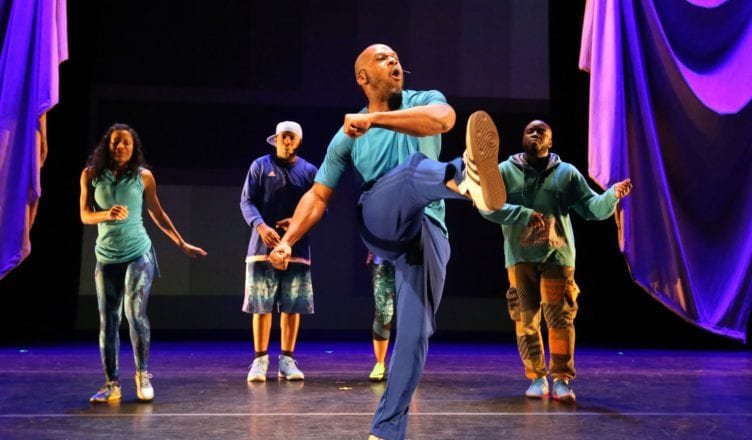 “This is a performance that incorporates poetry, dance, sung music from South Africa, Brazil, and American gospel, and soccer,” explained Marc Bamuthi Joseph about his production /peh-LO-tah/ that will be performing Saturday, March 2 at 8 p.m. at Lehman Theater. “I had two questions I wanted to answer with this, how do I pass on values of my ancestral homeland to my teenage son and how do I pass on joy to him. Soccer is the answer to both questions.”

Soccer always had a special spot in Joseph’s heart from his days growing up in New York City in the ’80’s. “I have all these visceral memories of being a kid scoring a goal. It’s such an uplifting moment. It brings electricity into the body. As a dancer and choreographer I see the game as a work of art in the way it accelerates and slows down the heart rate.” Joseph still gets on the field to kick around the ball, but he cautioned with a laugh, “I play 40 year old style. Slower and less competitive with no defense.”

As one of the five integral performers on stage for /peh-LO-tah/ he can’t risk getting hurt. “All five of us on stage each sing, dance and play with the soccer balls equally over the 70 minutes. It’s a real ensemble.”

A 2009 visit to South Africa played a major influence on the creation of /peh-LO-tah/. “South Africa was always a mythical place for me. To go there for the first time in 2009 right before their World Cup I saw how when they were building infrastructure they didn’t think about the people that were left behind by apartheid. They had this great stadium, but a lot of people were without running water. When money and politics are involved it can take joy from the game.”

By incorporating South African dance moves, capoeira and movements from the soccer field, along with music from spirituals to bossa nova to beat boxing Joseph is hoping /peh-LO-tah/ will bring audiences back to that joy along with inspiring them to think serious thoughts about our society.