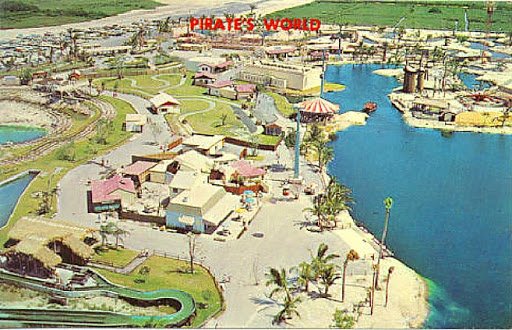 On my research for articles on South Florida music history, a strange venue kept popping up.

What a cool name for a club. Only a little more internet sleuthing led me to learn Pirates World wasn’t a club. It was a pirate themed amusement park complete with games and rides that was open from 1967 to 1973. From this old home movie it looked like a  fun and wholesome place for the entire family.

But what makes Pirates World stand out in history are some of the legendary concerts it hosted from 1969 to 1973. Led Zeppelin played back to back nights in August of 1969, in the months between the release of their first and second albums. The Grateful Dead and Cat Stevens both played there in 1970. Alice Cooper, Black Sabbath, T. Rex,  B.B. King, and Steely Dan all at the heights of their legendary careers brought their musical talents and energies to a pirate theme park.

Perhaps the most famous show was when David Bowie brought his Ziggy Stardust Tour to Pirates World. There is a low quality bootleg recording of the show you can listen to below.


The Miami Herald had a review that has aged poorly by critic  James Roos where he commented on how Bowie stood out, “When he stepped onto the stage at Pirates World Friday Night, lights flashed, Beethoven blared a la “Clockwork Orange” and there he stood – the incarnation of “gay rock”. Yes, this is the latest fad in rock’s theatrical bag of weird tricks, blatantly homosexual mannerism, with costumes to match.”

But nowhere in the review was there any mention on the strangeness of the locale of the show.  What a wonderful time the 1970’s must have been. To be alive when no one blinked an eye when you mixed rock n roll with roller coasters.