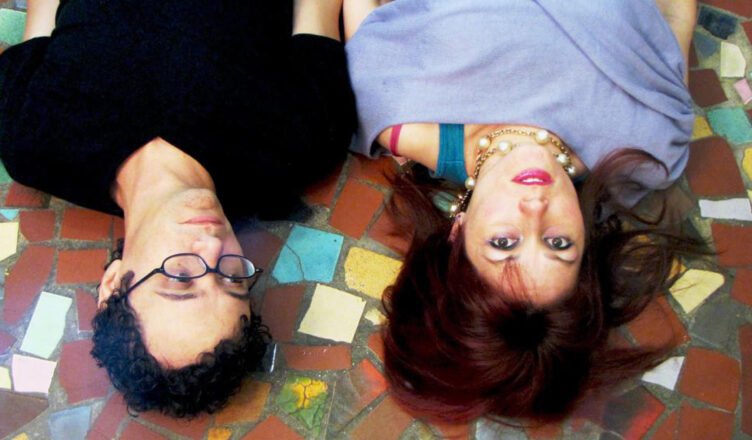 Illustrator Gabriela Crista Perez canonized us riding a shark. The cartoonish characters capture a voyage with wildly creative hand drawn and bold images. The shapes and colors emphasize the lyrical message in a seemingly sweet back and forth.

No real “rules” have always been our motto for  Pocket of Lollipops. We feel comfortable collaborating with other forms of film, art and media, from comic books to movies and music, so when we reconnected with Gabi’s artwork, we hired her to create this high concept video.

Holding true to our art influences Pocket of Lollipops is complementing this album release with a 36 x 24 inch coloring page of fan art and venues we have played at. We want to glorify the people and locations that have had a charming effect on them. Here are some questions Maite and I answered about the new video, and coloring book.

What inspired the song Tiburon?

It’s a song for people to think about their actions. Sharks (Tiburon) are a misunderstood being that act of instinct and survival methods. It’s a message to those who swim with the current regardless of where it’s going. It’s about being honest with yourself so you can be honest with others. it’s about not wasting time on nonsensical things. It’s about battling fear and putting yourself in a situation you must overcome or get devoured.

What are some of your favorite animated music videos?

The first one off the top of my head would be A-Ha because that is just such a great idea and probably one of the first animated videos, we set our eyes on when we were younger. We can’t just pick one Gorillaz video. They have a whole catalogue of wondrous creations that expands to their stage performance. We love the trippy vibe in `”When I Was Done Dying” by Dan Deacon. That video was made partnered with Adult Swim, who doesn’t love content on Adult Swim? They are right up our alley. A cartoon we could never live without is Ren & Stimpy and when that artist created Bjork’s “I Miss You” that combined weird and magical voice together. A few months ago The White Stripes released their animated video for “Apple Blossom”. That video is super artistic and the transitions with their colors. And lastly Mark Lotterman “Happy”. This music video is about this bird. trust me you want to see it directed by Alice Saey. But all in all, the first music and animation I (Tony) can remember was seeing the Yellow Submarine movie or the Beatles cartoon that played at 6 am. Then of course Harry Nilsson’s The Point blew my mind in middle school times, and then of course Pink Floyds The Wall was a game changer in itself. Saw it in 10th grade. So yeah, things changed after that

Can you share some details about the coloring book?

Yes, the coloring page is available with the 12 inch vinyl and was put together by Maite , during quarantine time we catalogued and organized our files. Maite was like we should do something with all these drawings people of made of us, so she started to recreate it on a large paper. While she was doing it she was like it needs something else so since venues were closed she thought she would combine either the venues logos or create her own logo that represented the places we played at like the Freedom Tower, Grand Central, some random whole in the wall house place called Black Sheep House we also added some out of town places like the Autry Museum in California or Spider Ball Ballroom in Texas. Really Maite organized them how she could get it to flow together, in between all that she added a few of her own drawings and designs too.

What specifically about Gabriela Crista Perez’s artwork made you want to hire her for the video?

Gaby was a former art student of Maite several years ago and they crossed paths last year via Instagram and she shared with me her artwork and I suggested we see if they were interested in working on a music video. And then a few days later boom we all talked, we wrote down the animations and drawings we liked from some of the posts we saw on IG and then we sent over the song and bam storyboards were created and then a bunch of chain of events happened and it was a total domino effect.