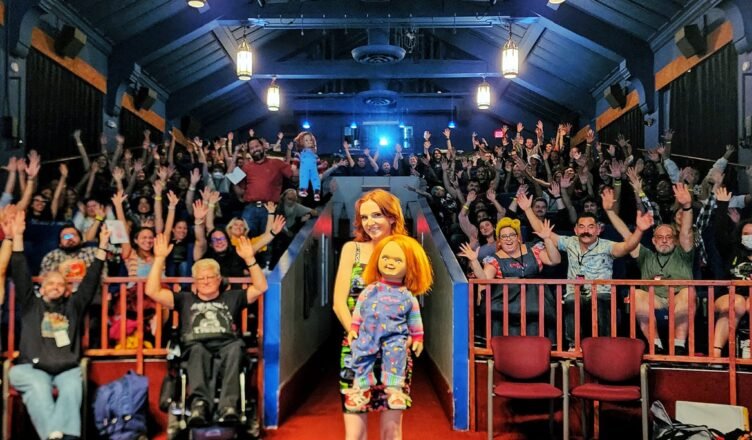 The Eighth Annual Popcorn Frights Film Festival is a hybrid experience presenting both in theater and virtual film offerings. Until August 21,. the anticipated horror film festival will enchant attendees with chilling entertainment, this includes world premieres and Q&A sessions with professionals in the industry.

This year’s bash seems to have something for every type of horror fan. History buffs will enjoy Living With Chucky, a documentary that discusses the basis and rise of the Child’s Play franchise and will teach viewers interesting facts such as how the doll got his name and why he has red hair. Viewers looking for a softer horror film should turn to Swallow, which also gets point for positive LGBTQ+ representation. Lastly, horror movie Follow Her, is a story about a young woman who is a struggling actress and live streamer who is searching in the wrong places for her success and self-confidence, looking for validation by accumulating followers and positive comments. Because of this, she goes down a dark and mysterious road by trusting someone she signed up to do a job with. Clearly, this film touches on a very modern and important issue.

“I wanted to make something that would be fun ride,” says Sylvia Caminer who directed the movie. Follow Her is the first narrative film Caminer has directed, but she has a hefty background in directing documentaries.  “But also, I want the movie to give you something to think about, and make you maybe contemplate a bit about how much confidence, face, and time you put into being online and social media.”

Other notable screening includes The Loneliest Boy in the World, She Came From the Woods, and Final Summer.

If you plan on attending any Festival film screenings/events, please RSVP for each film/event as soon as possible at the following link:  https://popcornfrights.eventive.org/schedule.

View all posts by Hannah Spence →