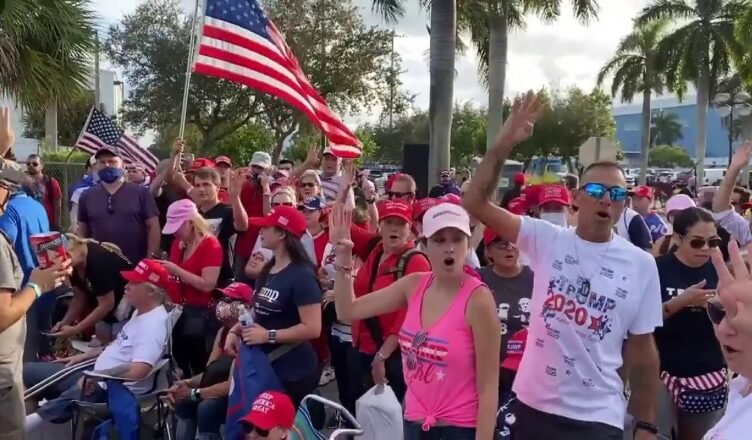 Driving towards the Rickenbacker Causeway I could see a man waving a giant flag reading “Trump for president”.  It was a normal enough sight for a Sunday before a presidential election. If I had taken a picture though there would have been one glaring detail that would allow you to pinpoint this was 2020 rather than any other election year. The man with the twenty foot flag was wearing a face mask.

Maybe the flag bearer was a mercenary, being paid to advertise for Trump. I’d like to think he was a brain damaged soul offered a few yummy candies in exchange for waving a flag without knowing who it was he was advertising for.

Because otherwise how can he not make the connection? People are dying all around us and entire industries have gone extinct. As a constant reminder of these failings we must all cover our mouths and noses.  And yet you mean to tell me there’s someone of sound mind who wants the man who drove us to the precipice of this cliff to have his hands on the wheel for another four years?

But the scary part is the flag waver is not alone. At least 40 % of voters will select Donald Trump as president. And I’m terrified that it will be a whole lot more.

When the pandemic started I wasn’t too critical of the president. This was an insane plague, a force of nature, what could man do against it? But as the days turned into weeks and now months, you start comparing how our country is doing compared to others and it’s pitiful. The nation of Japan just announced they have just passed 100,000 COVID cases throughout the entire pandemic. So what, you might say, they have a third of the US population. But then you learn the US had 90,000 cases alone last Thursday. In one stinking day the United States had almost as many cases as Japan had in nine months.

Every presidential race, we’re told this is the most important election of our lives. This is the first one where that might be true. When the electoral college selected Trump as president in 2016, I wasn’t a fan of his ignorance, but he seemed to have a certain sense of humor. Maybe the next four years would end up like an ’80’s Rodney Dangerfield comedy where a wisecracking sex addict found himself with the keys to the White House? But instead we’re in the middle of a disaster movie. 236,000 Americans have died of COVID.

I’m not a fan of Joe Biden. For a lefty like me Biden’s got a lot more in common with Ronald Reagan than he does with Bernie Sanders. But at this point I’d think a farm animal would keep us safer than the incumbent. Even  Ronald Reagan looks good in comparison to our current leader.

He did after all leave us this one piece of wisdom back in 1980, “Are you better off today than you were four years ago?”

If enough Americans vote with that question in mind I’d feel a lot safer for our future.