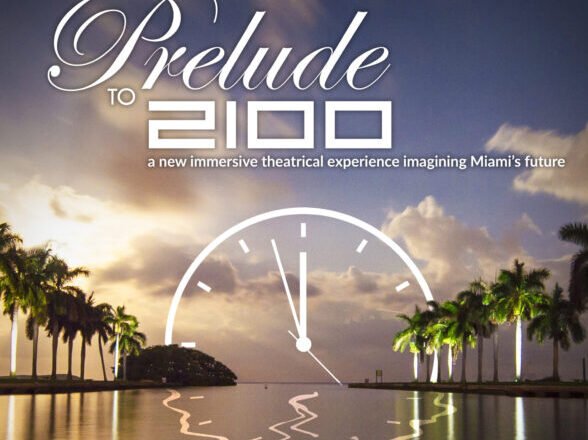 For the past couple of decades, scientists have relentlessly warned the public about the dangers of climate change. Rising sea levels, deforestation, and global warming have all sparked fear in the hearts of scientists and environmentalists. Nevertheless, the general public, influenced by the lack of government response, has seemed to dismiss these warnings, leaving the responsibility of our future – to think about how best to educate and inspire action, and bring forth change – in the hands of the community.

Prelude to 2100, a riveting immersive arts experience, sets Miami in the year 2050. Artist, curator, and producer, Susan Caraballo, speculates a future where the Deering Estate has been converted into a residential complex, The Co-op at Chicken Key, made up of tenants who have been displaced by the effects of climate change. Once when several rooms in the complex became available, these new Deering Estate residents decide to host their very first Open House, while at the same time re-opening as an art space.

Prelude to 2100 takes place outside on the Deering grounds, providing many opportunities for the guests to interact with the Co-op’s residents. Installations of visual, mixed media, theatre and sound will be located throughout, bringing forth new creative expressions as a way to educate and inspire the community about the pending threats of the overall theme of climate change. Included are featured works by Juan C. Sánchez & Jennifer de Castroverde, Laurencia Strauss, Kerry Phillips, the Department of Reflection, AMLgMATD, Cara Despain, Alicia Eggert, Gustavo Matamoros, Jits Microfarm, the Queer Theory Library, Carrie Sieh, Fereshteh Toosi, Kim Yantis, and Lucinda Linderman. Dance works will also be presented, featuring works by Michelle Grant-Murray/Olujimi Dance and Sandra Portal-Andreu. Prelude to 2100 is the final installment of six performance works dedicated to addressing climate change and sustainability, commissioned by Live Art Miami’s LALA Artists-in-Residence Program.

The idea behind Prelude to 2100 is to connect visitors/guests with the Co-op’s “residents”, who will inform, educate and share with them ways on how they themselves have adapted to this new world, along with new alternative sustainable ways of living.  Some residents that guests will meet include Anita, from Liberty City, who lost her home due to climate gentrification, and, Magdalena, from Venezuela, who vowed to never bring a child into this world. Stories of community, loss and love, and climate change empowerment will be heard and experienced when guests meet the residents.

We at the Deering hosted a behind-the-scenes visit with Susan Caraballo, a dedicated producer and curator for over 20 years, as well as an artist interested in working collaboratively on projects inspired by and centered around the ecological crisis. Here she discusses her work as the creator and artistic director of Prelude to 2100:

What drew you to create an exhibit? regarding climate change and the damage it causes?

Susan Caraballo: Prelude to 2100 is much more than an exhibition. Prelude to 2100 is a truly hybrid and collaborative project between me – as a producer, curator and artist – and artists whose work I admire, and who themselves are compelled to use art as way to engage and wake up our community to the reality of the times we are in.  While the project is focused on climate change, it is not dystopic. It certainly does address the damage that it causes. However, Prelude to 2100 focuses on a positive tomorrow. The different featured and/or commissioned works of art – music, sound, theatre, dance – introduce concepts of degrowth, adaptation and acceptance, among others.

There have been many things that have brought me to focus on climate change issues, it has been a journey of many years. One of the experiences that affected me greatly was traveling to my family’s home country, Cuba. It made me realize how much we, as Americans, rely on energy consumption and partake in consumerism. This, coupled with injustices that consistently headlined the news, prompted me to want to focus on social issues within my curatorial practice, and to think about and to create ways of bringing attention to and informing our community to the changes happening daily, around us. In 2015, I began working on an exhibition titled The Future Isn’t What It Used to Be that addressed the destructiveness caused by humans, ranging from gun violence to the environmental catastrophe. I was and continue to be passionate about social justice, I wanted to further focus my efforts the environment. The two are not separate as the first ones to be affected by climate change are minorities and the underprivileged. The degradation of our planet was becoming more and more prevalent and its impact on humankind more undeniable. This led me to further research on contemporary global issues and participate in numerous workshops and seminars addressing an array of topics that are intertwined with climate change. In 2019, I organized a symposium at PAMM titled ARTiculating Sustainability: Resilience in the Climate Crisis?  Ignited by this experience, I applied to Knight Foundation for a chance to win a Knight Arts Challenge grant to produce a series od projects that would bring the community together with arts, artists and the environment: #ARTiculatingClimate: Art Actions for Change. This grant, plus both of my residencies at Live Arts Miami and Deering Estate, enabled me to bring all of the projects together to create a new production, Prelude to 2100, that envisions a future Miami that we would want to live in based on a speculative future that leaves much of Miami underwater.

Prelude to 2100 takes place outside at the Deering Estate from 7-10p on Thursday, Feb. 3 and Friday, Feb. 4 and from 6-9p p on Sunday, Feb. 6. For more information please visit liveartsmiami.org. Tickets are $20 and can be purchased via this link: https://liveartsmiami.org/events/prelude-to-2100/.

Valeria is currently a Junior Ambassador for Miami Waterkeeper and a Deering Estate intern.

View all posts by Valeria Mejia →