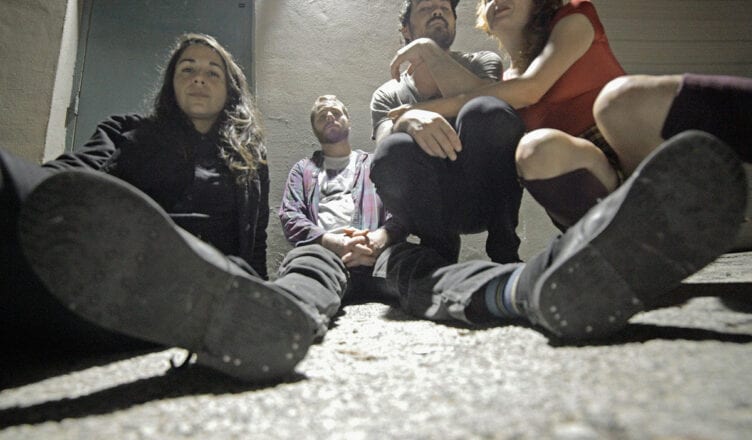 Prison Warder was one of the first bands I came into contact with when I arrived in Miami. Recommended by a friend who accompanied me to their show, I immediately fell in love. Call me a noob, but I had never been to a show where a singer neglected the stage entirely in favor of rapidly pacing on the floor. I guess that’s hardcore, baby.

That said, I don’t know if the band’s somewhat threatening sound is hardcore, noise rock, or some bastard spawn of punk. According to the band, noise rock is what they hear themselves referred to as most often. I’m not really comfortable defining them as any of the above. Though each of those genres at times, Prison Warder is the beautiful lovechild of many influences and entirely unique as such.

Named in reference to David Icke’s theory that the worlds’ elites are lizard people from another dimension, Prison Warder is Ana Farina Mackliff on bass, Lauren Palma on guitar, Bryan Adams on drums and Christopher Aschbrenner on vocals. With such a nod, it may be obvious, Prison Warder feels dangerous because it is as sardonic as it is smart.

Prison Warder’s masterful drums are perhaps what hold it all together,

guitar and bass that seem bellicose lend Prison Warder much of their unique sound. Screeching and dissonant, the music makes me think of getting headbutt right in the mouth, and liking it. Were Prison Warder a person, you might cross the street to avoid such a fate. Layered with vocals from pacing madman Aschbrenner, which are spoken or shouted or screamed, a transgressive but lovable sound is born. If I had to pick a band to be reminded of, I might say Shellac, but only at their most vicious. I might say Pissed Jeans.

First conceived in 2014 by Adams, his friend Eric Bollmann, and finished with lyrics from Aschbrenner, Prison Warder’s first EP, Waste, was born. In 2017 we were graced with two-track Room for One More. Then, in 2019, Wizened Limbs was dropped on the crews’ Bandcamp for my immediate and rabid consumption.

With no shows planned for the immediate future, these Davie-based babes are hoping to play some shows in the coming months. If you see them on a flyer, do all you can to make it out and allow Prison Warder to make a masochist out of you.

View all posts by Abbie Bateman →
Support The Jitney on Patreon! We run no ads for a clean user experience. But The Jitney needs gas. Please donate or become a Patron here