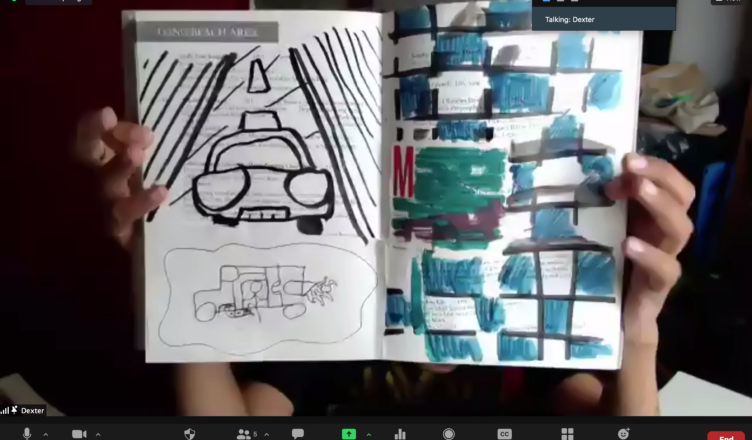 Editor’s Note: On Thursday, May 27 from 7-8 p.m. ProjectArt and MOCA will present Digital Imprint.  The virtual art show features work created during  artists’ tenure as part of ProjectArt’s residency where they taught, mentored youth, and created art in partnership with the Miami-Dade Public Library and the New Orleans Public Library.  You can RSVP for the virtual event here. Below one of the artists, Susan Feliciano  shared her experiences.

As a result of the pandemic, we literally, from one day to the next pivoted our delivery method from a bricks and mortar setting to an online platform. The challenge before me was not only to create an art curriculum to teach virtually but also one that was engaging, interesting, and interactive. All my training and experience up to that point was for in person teaching face to face. The question was not can I do this? We were too far along the path. Instead, the question was how do I do this now, like right now? The technology was here, and the students were waiting.

The first step for me was to get mentally prepared. Distance learning was fast becoming the new normal. Now it was my turn to teach through a screen, monitor, and camera. I had a new set of teaching methods to learn and visual resources to create fast. There was very little to time to rehearse. It meant rebuilding the projects, replanning the activities, and redeveloping the procedures to virtually perform the tasks.

Working with the 13 – 17 years old students had its advantages and provided a tremendous amount of freedom to be creative. As a group they readily absorbed complex concepts and had the technical skills to execute their ideas quickly. For 4 or 5 weeks they focused on a different media which included photography, drawing, poetry, and collage. They developed work centered on a variety themes such as Memories, Connections, and Anatomy. Their final project is a culmination of all their work produced throughout the program titled Reconstructed Narratives.

Each student received an art kit with a variety of art supplies along with a hardcover book. Their individual books ranged in topics from dinosaurs to chairs. The purpose of the book was to use it as an artist uses a sketchbook, to work on ideas. They were encouraged to work directly on top the pages. So, instead of looking at a white page and starting from a blank space. Each of their pages had pictures and/or text which served as a springboard for their imagination.

As a starting point, they created black line poetry from the copy of newspaper articles.

The process began with them selecting and circling words that called to them or captured their interest. Next, they drew lines with a black marker through the words and sentences not circled. One by one we read the poems aloud during our weekly class meetings. Some were funny, others were logical, and a few were lyrical. Then they selected images that connected with key words in their poem. These images came from a variety of sources including their own drawings, sketches or photographs.

They had photographed fruits and vegetables, the anatomy of their face, and things they hold. They had studied different points of view, composition, editing and lighting techniques to create a series of sublime black and white photographs. They used those skills to build a visual bank of images. Now they were able to arrange and compose these images and reconstruct new narratives onto the pages of their book. They made two-page spreads adding vivid color and bold lines connecting their thoughts and creating their story. The book is a visual journal documenting their art practice and linking their ideas about themselves, others, and the community they live in. Now a little bit about my own practice and the new work that is part of the ProjectArt exhibition.

As part of the residency, we the artists are given the opportunity to explore and develop a social practice alongside an artistic one where one informs the other. Three areas of that I am currently exploring are psychological and physical spaces, the emotional force of color, and the beauty of impermanence.

A Conversation on Canvas, my entry for the show features fiber artworks using ECO dyes reflecting on the spaces women occupy and the cultural ties that bind them. As a Miami Resident Artist, I designed a series of flags to commemorate the 100th year anniversary of the 19th Amendment granting women the right to vote. Each artwork explores a different social landscape through the processes of dyeing, weaving, and sewing.

The flag series incorporate the colors used by the American suffrage movement. These textile works use ECO dyes a sustainable practice of adding color from plant-based materials. Turmeric, black beans, coffee, and avocados are used both for their hues and our shared cultural connection.

Drawing with needle and thread, portraits of girls are rendered onto the surface of the canvas. Each face is based on drawing studies I used to teach in class where students took turns posing as models and artists. These images represent the future stitched into the present as part of a long history. The four mandalas, circular woven designs, are featured in A Conversation on Canvas II, they are part of a collaboration between my mother, sister, niece, and myself representing three generations of women.

This flag project is a work in progress changing over time and impacted by place. It was first part of the group exhibition, 40 Women Pulling on the Threads of Social Discourse by FAMA, Fiber Arts Miami Association at The CAMP Gallery in Little River, Florida. Then it traveled to the Dominican Republic where it was featured virtually as part of a solo exhibition organized by the Centro Cultural Domínico Americano de Santiago. Expanding to two flags it is now part of the virtual group show Digital Imprints presented  by ProjectArt Miami in partnership with the Museum of Contemporary Art.

When I thought of the title of the exhibition “Digital Imprints” what came to mind was the word huellas meaning fingerprints in Spanish. If you look up fingerprint the literal translation is la huella digital. Here digital refers to your fingers, your digits. It is fitting that the exhibition title uses the term digital used to represent technology but also can mean fingers, a means to create, communicate, and feel.

Susan Feliciano specializes in designing and delivering dynamic programs of art and museum education to diverse audiences that make a transformative impact on the community it serves.

View all posts by Susan Feliciano →