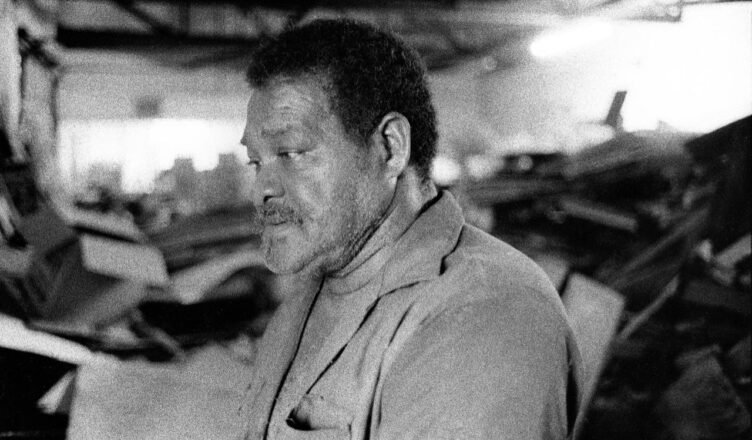 Abundant thanks to photographer Gary Monroe, who has shared his photograph of Young, as well as a selection of images from his art collection showing the artist’s distinctive talent. These examples of Young’s art can be seen through May 22, 2022, at the Tampa Museum of Art in “An Irresistible Urge to Create: Florida Outsider Art from the Monroe Family Collection.” For more information, visit https://tampamuseum.org/. The exhibition was organized and shown at the Boca Raton Museum of Art; after Tampa it will be exhibited at The Mennello Museum of American Art in Orlando.

Purvis Young picks up a wooden crate, turns it around and sits down. This quick gesture of recycling, turning a crate into a stool, is typical for an artist who turns crates into paintings museums covet. Behind him, on a bleak street corner in Overtown, is a warehouse stuffed with more crates, piles of wood, strips of carpet, a dozen-plus bicycles and cans of paint. An iridescent figurine of a rearing unicorn glistens on one of several dusty TV sets while a book about Vincent van Gogh is tucked in the basket of an old bicycle.

When visitors show up, Young turns his back on this impressive clutter that is both his studio and home and hunkers down on his makeshift stool, facing the street corner. He lets his art speak for itself. Fantastic stories tumble out in his paintings on wood and other grimy materials. In luminous shades of house paint no one else has ever mixed, Young tells of the despair and dreams of job seekers, basketball players, pregnant women and Haitian boat people. There are also angels the color of flames and spectral herds of rearing horses – graceful as unicorns, but far more impassioned.

Rendered in Young’s undulating brush strokes and rhythmic compositions, the scenes chronicle life in Miami’s inner city with eloquence. “You got my paintings, ” he once said, “you got my soul.”

Now that soul is poised on the cusp of a substantial breakthrough. Young’s art hasn’t changed dramatically in his 30-year career, but the fickle world of contemporary art has. So-called outsider artists like Young – who have taught themselves, developing far from the world of academe – are increasingly being accepted into the ever-more-diverse mainstream.

And Young’s not the only outsider breaking through. Paintings by Thornton Dial, who worked for years in an Alabama boxcar factory, were part of this year’s Biennial at the Whitney Museum of American Art. James Castle, a self-taught deaf artist who lived with his family in Idaho, had more than 100 minute drawings on matchbooks and cigarette packs shown at New York’s Drawing Center in March.

“I do think that the tides are turning, and that we are going to see a lot of artists we support become more integrated into the larger art world, ” says Brooke Anderson, curator of the Contemporary Center at New York’s Museum of American Folk Art. “The reason is that the work is really strong. It’s all art of our time. That kind of integration can allow new scholarship, new ways of seeing.”

Things began changing for Purvis Young last year, when internationally known contemporary art collectors Donald and Mera Rubell of Miami purchased the contents of his studio – around 4,000 paintings, drawings and books. A fraction of that is on view in their two-story warehouse on Northwest 29th Street.

“For me, Purvis is a kind of prophet artist without being pedantic, ” says Mera Rubell who, like Young, won’t discuss terms of the sale. “He makes us focus on neighborhoods, on people that are not part of the glamorous vision of America. He glamorizes the uniqueness that exists in every person regardless of their economic or social position.” 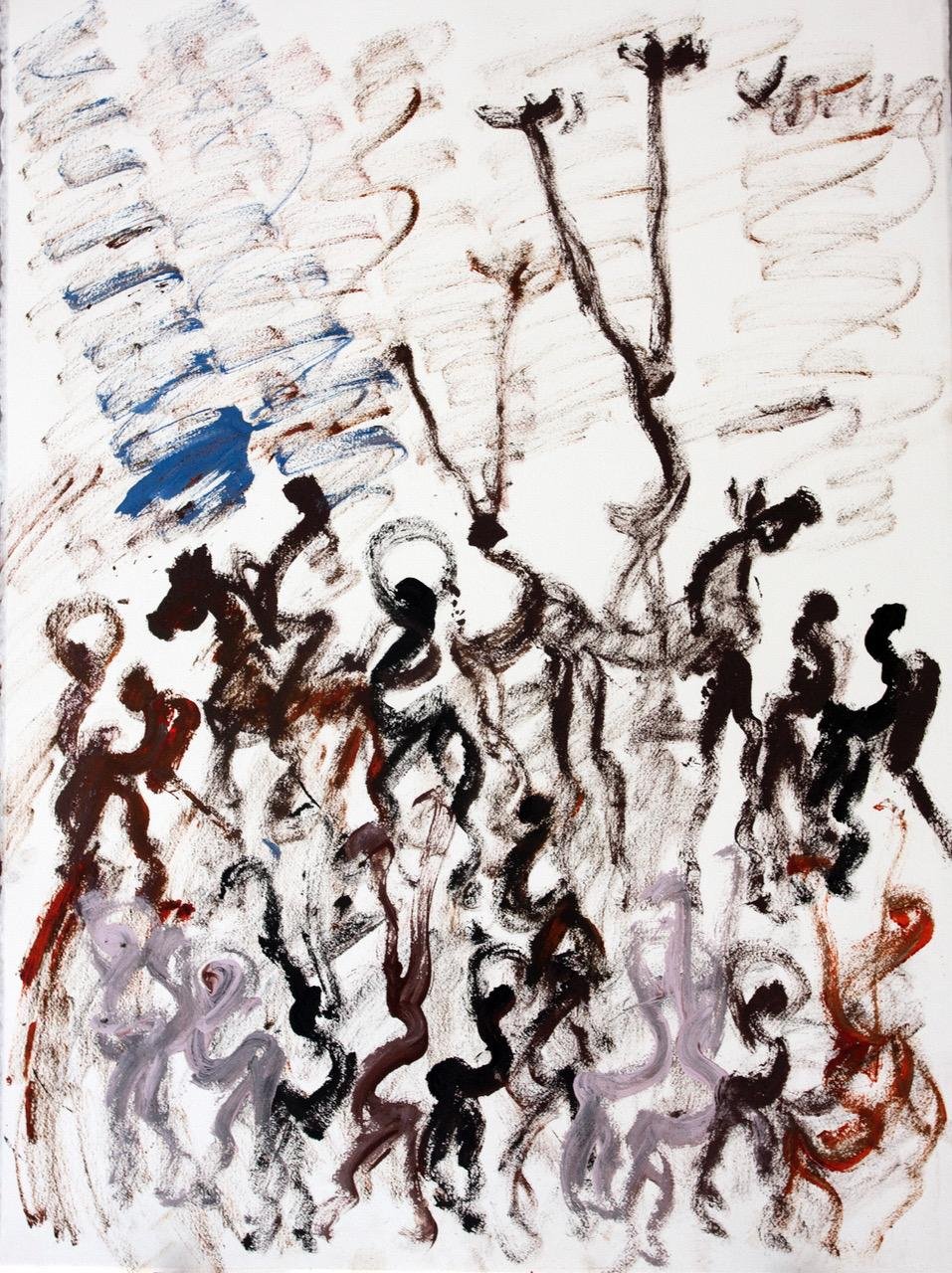 Purvis Young may soon have his own museum show, culled from the Rubells’ holdings.

“Our objective is to have a traveling museum exhibition and to donate work to all institutions that have a show of his work, ” Mera Rubell says. “I wouldn’t be surprised if we are talking about half a dozen institutions in the U.S. and Europe. . . . The world knows Purvis Young.”

In preparation, the Rubells’ staff has embarked on a Herculean task, fumigating, photographing and documenting Young’s work. Binders will be created, says the collection’s director Bill Begert, with photographs of pieces in the collection, allowing curators to choose works to show or acquire.

Young’s talent has been recognized by curators and collectors for years. In the early 1970s, he found champions in Miami-Dade public librarians Margarita Cano and Barbara Young (no relation), who shared art books with him. In the past decade Young’s work has been shown at museums in Alabama, Florida, Ohio, New York, New Jersey and Virginia, and at galleries in Miami, New York, Philadelphia, New Orleans, Chicago and Cologne, Germany.

But most of this recent attention has come at a price: not only has Young been promoted as an outsider artist – a problematic term many find patronizing – but he has had troubling relations with dealers who, friends say, did not compensate him fairly.

He also extricated himself from an exclusive contract with former South Florida dealer Joy Moos. (Young says now he never signs a contract without consulting his lawyer, and his current Miami dealer, Fredric Snitzer, says Young receives the same commission that the gallery’s other artists receive.)

On a recent weekday, Young stared out at the street and talked about what was on his mind. A bearded, barrel-chested man in shorts, sandals and a shirt with cut-off sleeves, he launched into a purely Purvis conversation – one both rambling and right on target.

“That’s all I do is fantasize, ” he announced. “As I get older I feel like I was a Zulu: I was no chief, I was just part of the Zulus. I look at Rembrandts, I look at all old Masters. I listen to opera because opera’s telling a story.”

A fan of public television, he says that “one night I woke up and they were telling a story about Col. Rhodes, you know, of Rhodesia, and how he went to the British authority and got orders to conquer that part of Africa . . . Zulu was a tribe the British always had problems with. The Americans had problems with the Sioux and the Blackfoot. . . . You know, they was takin’ land. The same thing went on in Africa.”

Moving on from colonial Africa and 19th Century America to the present day, Young continues to rail about oppressor and oppressed, a theme that runs through his art. He mentions “those two dudes on Death Row that didn’t do nothing. Innocent they find them.”

Eventually an apocalyptic vision surfaces. “I look at mankind and the problems, ” he says. “I see a lot in America, but I don’t speak out, I just paint. As I get older, I see eyes of fire, fire burning up the world.”

In talks like this, Young slips seamlessly between real-world knowledge and the visionary quality that makes his art so remarkable. That quality is “astrologic, like something he sees in the sky. He lays down and dreams and then he can paint, ” says close friend Silo Crespo, a Santería priest and retired merchant seaman who shared his Overtown home with Young for years.

Other knowledge, says Barbara Young, comes from his favorite populist sources: public libraries, public television and national public radio. But as willing as he is to expound on what he has learned about Mozart, John Brown and John Coltrane, he’s guarded about his personal life.

“Some folks don’t take me serious. They come to my place and want to talk about the bikes I got, ” he complains. “If you don’t talk about my paintings, I don’t want to talk. God put me here to be an artist.”

God sent Purvis Young to Overtown in 1943, where he was one of three boys and two girls born into a family of Bahamian descent. As a boy, he frequently suffered the wrath of his grandmother, according to Crespo, who says Young “grew up in fear.”

Young remembers doodling submarines and horses as a kid, but his schooling did nothing to nurture that talent. Even worse, he saw an uncle who carved wooden figures lose control, only to be carried off by the police. “I don’t know what caused his mind to get messed up. He always stayed by himself. It’s the same with me, ” Young admits. “Someone said, you know, your uncle might have seen the same things you see. The world ain’t changed too much.”

A fearful childhood spiraled into an adolescence of crime, and Young dropped out of Booker T. Washington High School. By the time he turned 18, he was doing time in Florida’s Raiford Prison for armed robbery.

Jail proved to be a vast improvement over high school. A jailer gave him pencil and paper, and Young discovered he could draw. A few years later that discovery became his destiny when he happened upon a book illustrating the Wall of Respect, a legendary Chicago mural filled with portraits of African-American leaders. 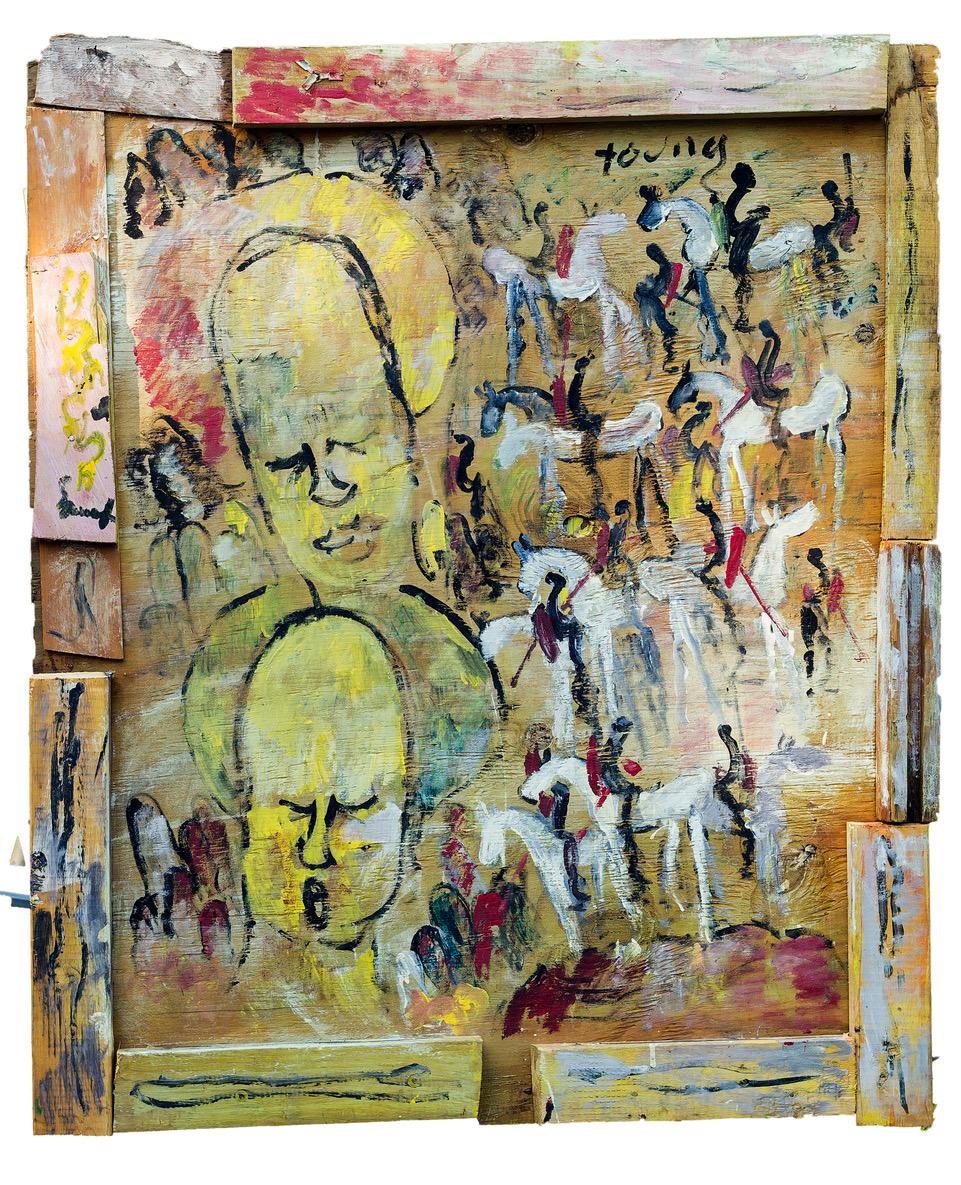 Finding out more about the late 1960s movement to create murals in black, Latino and other ethnic neighborhoods, Young “saw that ordinary people could paint the stories of their own communities and give them mythic importance, ” wrote University of Miami art historian Paula Harper in a 1992 essay.

So he began painting his own stories of urban struggles, of figures behind bars reaching upward. Some of the first stories appeared in Goodbread Alley, a makeshift mural Young began attaching to tumbledown buildings on Northwest 14th Street in the 1960s.

“I think it was a kind of nervous energy he had to channel. At that time people in his community were very angry, ” artist Cesar Trasobares, who is writing a book on Young, says of the mural, which was torn down in the mid-1970s to make room for a park next to the Culmer/Overtown Branch Library. “Not only was it a way to channel that energy but it was a vehicle for ideas. Much later I learned about the African tradition of the griot, and in a way Purvis had become that, ” he adds, comparing Purvis to the African public speaker who recites a village’s oral history.

Young did another mural, also since destroyed, inside the old downtown Miami-Dade public library in 1983, recounting Miami’s race riots. Two other murals from the mid-1980s are still in place: one on the outside of the Culmer library and one at the Northside Metrorail station. They tell of basketball players and construction workers – common people caught up in a griot’s vivid narrative. ‘LET ME WANDER….’

Fast forward to the present and Young is still the griot, compulsively drawing what he sees on the streets and in his dreams, even during doctor visits to treat the diabetes he developed about six years ago. The man, who once gave a boy a quarter for a poem and has worried about children coming into the world without families to care for them, now frets that kids eat too much greasy food.

Once so shy that a 15-minute conversation was a challenge, Young recently spoke for an hour and a half to New World School of the Arts students, who visited his current show at Fredric Snitzer Gallery.

While a larger audience and more recognition are surely on the way, Young remains fiercely independent and rooted to his surroundings. When asked if he’d like an air-conditioned condo, he says he has a fan and lets it go at that. “If you’re happy, don’t try to tell me how to live my life, ” he says. “Let me wander and do what I want to do.”