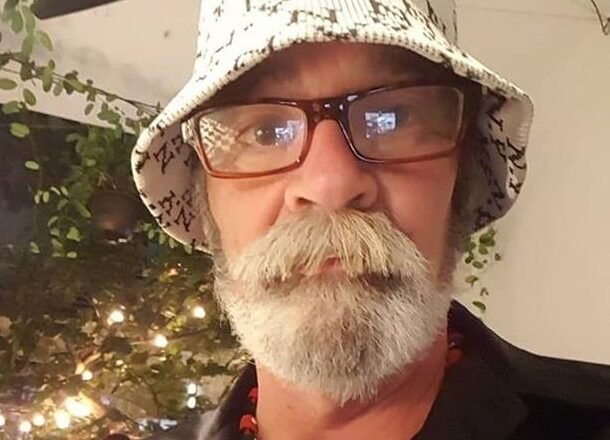 Carlos Suarez de Jesus, a Miami arts journalist and artist himself, passed away February 3rd, 2022, after years of health issues stemming from a stroke and a heart condition.

Per his daughter Bethany, as posted on Carlos’s Facebook page:

“My father was an incredibly brilliant and delightfully odd man who touched the lives of so many through his art, writing, and storytelling. He was a father, grandfather, son, brother, uncle, husband, mentor, and friend…and so much more throughout his action-packed and unforgettable life.”

The Jitney knew and respected Carlos as a writer and artist. He was cool, sweet, quirky, and wild, a true patron saint of Miami. We visited him a few times at his gallery in Little Havana and enjoyed his charm and cutting intellect.

His editor, and former publisher of Miami New Times, Chuck Strouse, outlines Carlos’s legacy in a well-written and fitting obituary.

“As New Times art critic for a decade, he helped create what has become the world’s liveliest and most enterprising art scene. Before that, he was a writer for two Miami mayors. And as a teenager, he worked in the epicenter of the city’s bustling 1980s cocaine market, the Mutiny Hotel…”

His “Art Brute” column in the Miami New Times covered a very important period in Miami’s development, 2003 to 2016.

During this period, Wynwood flourished, with its emerging artists and welcoming galleries, funded by real estate speculators. As did Art Basel and its satellite Fairs. This era truly turned Miami into a legitimate world class cultural affairs destination. And Carlos was on it, sharp with a pen. He wielded it like a knife, cutting into white space with swift, bold strokes, covering a sprawling art scene with vigor and passion — this man could write.

And he knew a lot about a lot.

He will be missed and remembered well by Miami history.