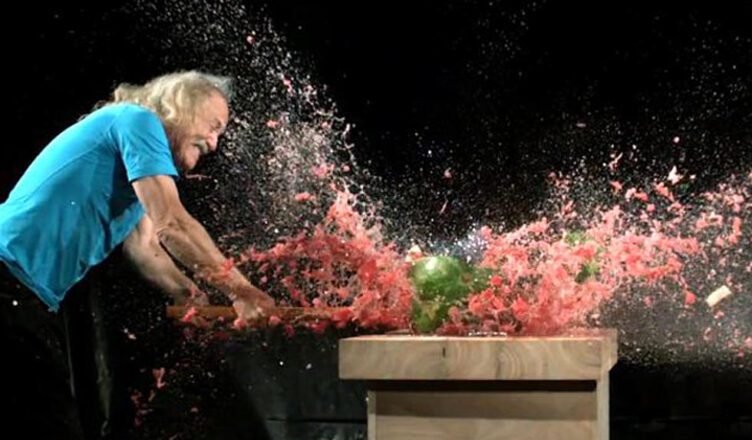 Back in 2015 an editor asked if I wanted to preview a Gallagher performance. Gallagher was the mustached comedian whose claim to fame was that he smashed watermelons on stage. He was spending his later years lurking around Miami and didn’t have the best reputation as an upstanding individual. But since I never turn down the chance to talk to somebody who was famous when I was a kid, I took the assignment.

When I heard Gallagher passed away earlier today I reread the story I wrote seven years ago and it jogged my memory that during the interview and afterward Gallagher inundated my inbox with a dozen e-mails of comedy gags he wrote and videos that he filmed.   Sure enough I still have all those emails saved. In tribute to the passing of a phenomenon, here are a few of Gallagher’s writings and performances that were sitting untouched for seven years in a folder marked “Gallagher”.

I think it wastes a good day off from work. I find somebody who was gonna vote the opposite of me ..and we both go fishin’ !
Fishing is exactly like politics ..except we’re the ones that get fished in ..and we swallow the bait hook ..line ..and sinker.
The vote is a defensive weapon. Never vote for someone who isn’t going to win. You might as well be fishin’ with me. Don’t vote to make a statement. Vote to make a difference. In America ..we should ALL be swing voters.
Donald made his money in real estate.
Hillary made her money as Secretary of State.
Trump wanted to be rich ..to become President.
Hillary wants to be President ..to become rich.
Just what we need ..Bill Clinton back in the Whitehouse with nothing to do.
Hillary reached out to Tom Brady to talk about deflating some game balls
That are too game.
When Elliot Richardson got caught buying a hooker ..Bill Clinton called him. “You aren’t payin’ for it are you ? Don’t you have an intern program ? “

I work for Mr. Donald Trump

I’m his accomplice ..protege’ ..assistant ..confidant ..apprentice
I don’t handle any of the complaints.
Whadu I look like ..an idiot ?
I’m in charge of strategies ..and since we never have any ..I have alot of free time.
Now I’m not sayin’ ..I haven’t come up with a lot of ideas for what The Donald should do or say ..But he nixed um ..and it cracked my ipad face ..so I guess I can share them with you.
I suggested Mr. Trump start wearing a football helmet without the face guard of course. This solves “the hair problem” ..and projects the confrontational ..highly competitive image he wishes to convey ..no to project ..no demonstrate ..no shove down America’s throat !
I suggested Mr. Trump should say :
” Boy ..Bruce Jenner sure went to a lot of trouble just to run into Bill Cosby. If I ever run into Bruce ..I’ll tell him his show needed a catchier title like The Dick then Dyke Show for example Talcum in the Middle or Father Knows Breast. And just to prove I’m watching my mouth more now ..I left out ..and didn’t say ..Cleave it for Beaver and I Love Loosely. “
” I’m not against Mexicans. I love Mexicans ..no matter what country they come from. I just want them to quit digging tunnels at the border ..I plan to build there ..and I’ll need to get a good geological report. And just let me remind you drug lords ..if those tunnels are on our side ..they have to conform to the Disabilities Access act. They need handrails ..and of course they’re too short. “
I plan a huge golf course along the border so these illegals are not only in the wrong country so legally out of luck..they’re out of bounds. I say ..”If they’re in the ruff ..you can ruff ‘um up.”
“What this country needs is more matre de’s” ..nobody knows how to act right because of you lenient teachers and you youth leaders and you free range churches. Matre de’s won’t put up with no crap. I employ a regiment of matre de’s ..that I can make available to this country if ..what am I saying ..if ? When I’m elected ..We’ll have more decorum ..in the forum. And at my restaurants and nite clubs ..we seat ladies first ..so stick it ..Megyn Kelly.
Corporate America has always known how to handle drunks. With Matre de’s ..and bouncers. But we’ve got a government full of vale’s ..little thieves ..that go thru your personal ..and drive your car crazy ..then hold their hand out for a tip.
Obama said his Whitehouse was gonna be the most transparent ..and it has been ..to the Chinese hackers.
I’d let the middle east continue ..successfully ..as we’ve planned. We’ve got to test these innovative new weapons somewhere. That’s one thing they don’t build in China ..American weapons systems ! ..I don’t think ..maybe some ..non-strategic ..parts.
..Sure I have an ego and a dark side ..but I’m just like that recent picture of the moon ..when seen up against the Earth ..Am I that big ? ..no. So I’m planning a lighted sign on the moon ..pointing the way to my Trump Tower on Mars ..it’s a real get-away. I’ll sell you the air. I’ve been buying air rights in New York for decades.
I want to make the world safe for golf. You have no idea how much groundskeepers look like terrorists.
Liked it? Take a second to support The Jitney on Patreon! The Jitney needs gas. Please donate or become a Patron here