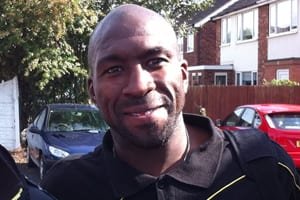 Is it even worth mentioning that racism is not a new thing? Or that it’s going on, stronger than ever? Or that it rears its ugly head in high-profile sports ? Who would we be kidding? Racism is alive and well. Because it exists  beyond the stands and could potentially be solidly entrenched into the front offices of clubs across the Old Continent, South Floridians stand to benefit from it.

Forget the Raheem Sterling and Moise Kean stories and the lackluster responses by FIFA and the concerned governing bodies—that’s like trying to organize a diversity symposium for Millwall fans. We’re talking institutional racism in British football and how one egregious slight this past season could be a huge boon for Beckham and co.’s Inter Miami CF. We’re talking about bringing Darren Moore as manager.

The 2018 Premier League Manager of the Month helmed doomed side West Bromwich Albion at the end of the 2017-18 season and posted a record of three wins, two draws and one loss as the Baggies were relegated to the Championship League; a damnation bestowed upon them after three years of shit management by wet towel Tony Pulis (36W-36D-49L), caretaker Gary Megson (0W-2D-0L, no dumping on him, this all fell unto his lap completely unasked for) and wetter towel Alan Pardew (3W-5D-13L).

Darren Moore, an England-born Jamaican international centre back, built like the rebar-reinforced cement floor of a slaughterhouse, affectionately known as “Big Dave,” “Mooro” and/or “The Big Man;” came pedigreed to the Baggies as he had spent over 100 caps holding the defensive lines at The Hawthorns in the early aughts. At the time of his appointment, Mooro was one of a very small group of black managers in professional football in England and perhaps the only one with a high-profile appointment. Certainly, the only one in the Premier League and the first Jamaican to manage in it too.

So how in the fuck does he get sacked after a few bad games in his first full season commanding the team—a few bad games but still teetering in the top five of the table looking to ascend back into the premiership with a 20W-11D-11L record at the time of his sacking—when the very white managers prior to him basically mismanaged the team into the laughingstock of the sport? Ah! Because he’s black and a black man is not allowed to succeed in anything, specially a team in England’s top flight. Prove it otherwise. The dried snot on Margaret Thatcher’s hankie known as Tony Pulis was given all the chances, season after season to improve. Of the handful of West Brom managers who’ve directed over 100 matches, Pulis is dead last in win-tie-loss percentages. He’s the worst. Complete shit.

But he was given chances.

Mooro, who did nothing short of a miracle to turn the club culture tides at the end of the 2017-18 season and brought a revamped attitude to the team, even fielding a team composed of loaners, journeymen players and guys who are better known for having done good things elsewhere, didn’t get a fair chance. He was never going to because it is evident that leadership over there in the West Midlands spooks easy—pun intended.

Now, we’re not going to fix racism and we’re most certainly not fixing it in sports. It exists everywhere. Racism and intolerance are alive and well in MLS too (Latinos, here’s looking at you and your varying ideologies on who’s LGBTQ and who’s not) but we have a solid opportunity here to correct at least one wrong and come out looking like heroes: hire Moore as Inter Miami CF’s first manager.

Here are some pros:

Here are all the cons:

Institutional racism sucks and it sucks because Moore’s return to the Premier League would’ve been historic. Football will not have that story in its books. But we can make new stories in South Florida by putting him in charge. We already have the “gutsy” pink uniforms you know some knuckleheads are going to make comments about. Let’s put Mooro in one and see if the knucklehead wants to say it to his face or make comments of any kind for that matter.

I can smell a glorious partnership with lifestyle brand Black Arrow FC and Inter Miami CF because this would be an intersection of “dope soccer and black culture;” this would be the kind of Miami story we want told; one of diversity and inclusion, of social justice and fútbol; lots of fútbol.

Join me in saying: hey Beckham, GIVE IT TO THE BIG MAN!