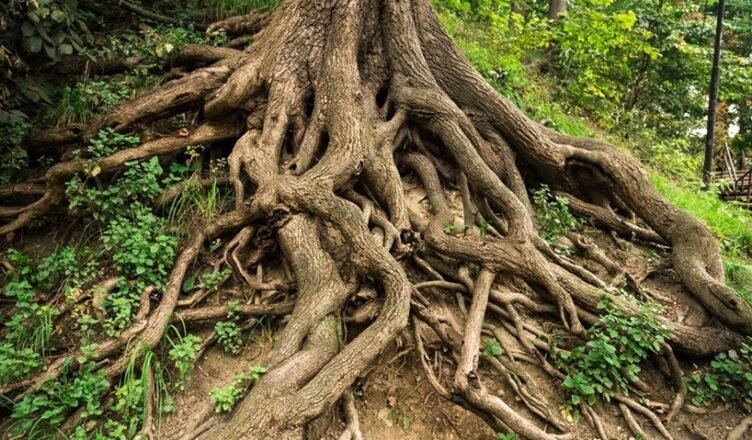 Many years ago, I planted a bougainvillea tree in my back yard. Try as I did to control it, over time, the shrub spread persistently. It now
dominated almost the entire yard. It had to go.

With the help of a borrowed chainsaw, the skinny, thorny branches on
the outside edges snapped off easily. The thick branches closer to the
trunk were much tougher to remove and even threatened to derail the chainsaw. But I kept at it. An hour later, the canopy of the 40 foot
bougainvillea lay defeated on my lawn.

Next up, the stump. I swung a heavy, 6 lb. pickaxe at the stump, and my entire body shook like a cartoon character…ringgggggg. The stump was concrete.

Maybe I bit off more than I could chew. I swung the pickaxe again. But this time, I aimed for one of the thick roots attached to the immovable stump. The root succumbed with a satisfying crack. I severed the intricate web of roots one by one, and finally was able to pry the stump out of the ground with a shovel.

As the massive bougainvillea tree lay in front of me….leaves, branches, stumps and roots, I saw racism. Here’s how.

When we first planted the bougainvillea, it seemed cute and colorful.
Kind of like a seemingly harmless, racial joke. Here’s a rule to abide by. If a joke begins with a glance over your shoulder to make sure nobody is listening, don’t say it. Those types of jokes are the germination of racism. The hollow laughter turns into the sharp thorns of a bougainvillea. Left unchecked, those thorns eventually become impossible to ignore and inevitably cause pain.

Just as the thick branches of the bougainvillea grow to make the plant resilient to strong winds and harsh weather, the longer racism is
allowed to exist, the harder it is eliminate. The tree of racism will not go away on its own. Even worse, the most crucial part of the tree, the roots, are constantly evolving their complex, remarkably sturdy system of support.

The key to vanquishing racism is to disconnect its roots. Unfortunately, the roots of racism are not the obvious hood-wearing culprits. We wish it could be that simple. Just like the bougainvillea, the roots are much better-disguised. Actually, they look like you and me. That’s right. We are all guilty of being unknowing racists. Here’s one example (of many). Have you ever said, “That’s a bad neighborhood?”

In high school, I played on the basketball team. After away-games, our bus would stop at the underpass of I-112 and NW 12th Ave in Liberty City and let out some of our players who lived there. I thought, “Oh my god, this is a bad neighborhood!” If I would have got off the bus with my friends that lived there, would something bad have happened to me? Because I’m a white Latino? Who in Liberty City would want to harm me just because I’m white? Nobody. But that’s what we were told (and Google still tells us), and that’s what I mindlessly believed. Unknowingly, I was one of the roots that supported racism. I now know better.

The stump of racism is as solid as concrete. It will withstand  everything you throw at it. Dismantle those roots, however, and it’ll fall apart the way my bougainvillea did. If you can’t find those roots, keep digging around. They may be closer than you think http://loans-cash.net.