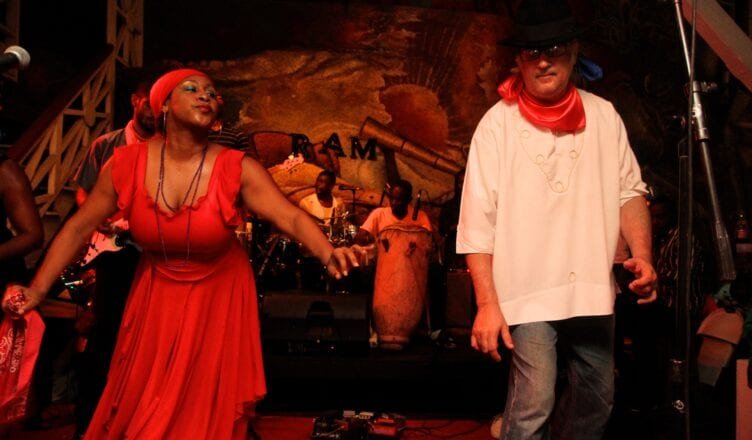 Though often classified as Voudou rock, RAM singer and founder Richard Morse hates that descriptor for his band. “I don’t like to use the word voodoo because people don’t know what it is or how to grasp it. People think of pins and dolls.”

When RAM comes to play North Beach Bandshell, October 26, Morse is happy with people just getting down to the beat and dancing to their music, but adds, “if you analyze what we do, it can get deep.”

Morse grew up in what he described as “the burbs.” His Mom  (folk singer Emerante de Pradines) and her father before that were Haitian singers. After college Morse got the music bug hanging out at CBGB’s listening to punk and new wave. He bought a bass and learned to play. When the world music boom happened and a friend suggested Morse go to Haiti to find new rhythms.

Morse took his friend’s advice and n 1990 he met his future wife, Lunise Morse. They gradually  turned her dance troupe into what became RAM. “I took their drummers aside and played guitar with them,” Morse remembered. He slowly moved to bass and now only sings. “First we did our songs in English and then we evolved into Creole.”

The RAM Miami Beach show will commemorate the Haitian festival Fete Gede. “The dead in Haitian culture are the gede spirits. They take care of the cemetery. This time of the year  they do homage to those spirits. We do a big party in Port au Prince and bring these parties everywhere.”

While Morse’s contribution he said was mostly to put electric guitars into the sound, these rhythms actually go back centuries. “Haiti became independent in 1803. Because at that time 50% of Haitians were born in Africa all these rhythms from all these tribes became preserved. When Africans hear Jamaican music they’ll say that’s from Jamaica. When they hear Haitian music, they say, ‘that’s our stuff!'”

Morse credits the musicologist Ned Sublette with giving a more accurate description of RAM’s connection with voodoo rock. “He said rock n roll music is voodoo music, but no one had shown how the two worked together until RAM came along.”