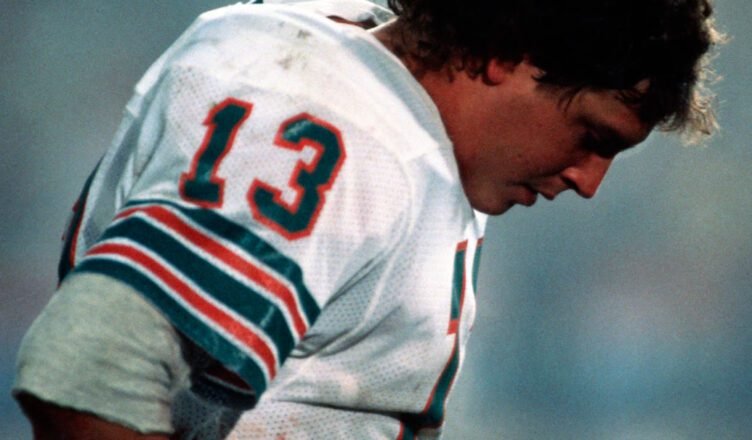 Because I am a glutton for punishment I continue to be a Miami Dolphins fan.

It wasn’t always this way. Growing up every autumn Sunday, and an occasional Monday night, I got to see the greatest pure passer who ever lived. With Dan Marino no deficit was too large and no game was ever out of reach. With his quick release, pocket presence, and impeccable accuracy, win or lose, every Miami Dolphins game was a treat to watch. But since his retirement in March of 2000, the Dolphins quarterback position has been a house of horrors. From the incompetents to the underachievers to the slightly above average, the Dolphins have had 23 starting quarterbacks. From worst to least worst I have decided to rank them all.

As I said I am a glutton for punishment.

In 2006 the Dolphins infamously had their pick of either Culpepper or Drew Brees. Then coach Nick Saban wasn’t sure about how Brees’ injured shoulder had healed and opted for the Minnesota Vikings small handed quarterback, Daunte Culpepper, even giving up a second round pick to obtain him. Meanwhile Brees went to the Saints and won them a Super Bowl in 2009. Culpepper started four games for the Dolphins, throwing two touchdowns and three interceptions before saying his knee hurt and shutting himself down for the season. Culpepper was released, went to the Raiders, and proceeded to score five touchdowns against the Dolphins when he faced them in 2007. Three more touchdowns then he accomplished during his horrific Dolphins tenure.

At the time I thought the Dolphins trading a second round pick for Rosen who had been a top ten pick the year before was a smart risk. It only took a few games for Josh to prove my optimism wrong. In three starts in 2019 he couldn’t win a game, throwing one touchdown and five interceptions with a fumble lost. The next offseason the Dolphins couldn’t even get a sixth round pick for Rosen and waived him into obscurity.

Cutler’s stats for 2017 make it appear he should be higher on the list. The Dolphins went 6-8 when he started, including a dominant victory over the Super Bowl champ New England Patriots. He even threw more touchdowns than he did interceptions having 19 TD’s and 14 interceptions, but statistics can be misleading. Cutler was retired when then Dolphins coach Adam Gase, gave him $10 million dollars to be the Dolphins emergency starting quarterback. And Cutler played like he’d rather be on the beach than on the field. Never more so than on the below play trick Wildcat play when he was asked to line up as wide receiver.

Cutler really selling his role in the Wildcat at the bottom of the screen pic.twitter.com/WgHxXvxlHL

This second round pick was selected by the Dolphins in 2007 and returned the favor by throwing one touchdown and three interceptions  in four career starts, losing all four of those games.

Poor Trent Green. It could have been his name in the hall-of-fame and an inspirational movie based on his story, but he had to get hurt right before the 1999 season. Kurt Warner took over and led the Greatest Show on Turf St. Louis Rams to Super Bowl glory. The Dolphins in 2007 thought they’d take a much older Green and test their luck. But Green couldn’t win a single game for Miami, going 0-5 before a concussion ended his season.

While the Rams got Kurt Warner when Trent Green got hurt, the dolphins had Cleo Lemon. The final starting quarterback for that dreadful 1-15 2007 season, Lemon gets the top slot for leading the Dolphins to that season’s lone victory. Unfortunately, Lemon also gave the Dolphins seven losses in his seven other starts.

Lucas killed the Dolphins when he was with the Jets, so it seemed like a smart move to bring him to Miami in 2002 to either replace Jay Fielder or serve as a back-up. When Fiedler got hurt, Lucas proceeded to kill the Dolphins again, this time as their starting quarterback, wasting an amazing season by runningback Ricky Williams. The Dolphins were 5-1 when Fiedler broke his thumb, Lucas came in and torpedoed their season. Going 2-4, including the worst ever game by a Dolphins quarterback. In a loss to Buffalo Lucas was responsible for four interceptions and two lost fumbles.

The longtime third stringer, got a couple starts in the 2004 and 2005 seasons. His one moment of glory was in 2005, when the Dolphins fell behind by 21 against Buffalo and Sage managed to lead Miami to a comeback.

After Tua got hurt in 2021, Brissett came in and won two out of five games for the Dolphins. But one of those losses was an ugly defeat to a Jacksonville Jaguars team that had lost 20 consecutive games until beating up on Brissett.

The six-foot-seven qb was big in every facet that mattered except on the field. In his five forgettable starts for Miami Osweiler went 2-3.

Over the 2009 and 2010 seasons Thigpen played six games, but started only one, an ugly 16-0 shut out to the Bears. Thigpen gets some respect, because the week before that he came off the bench to lead the Dolphins to a victory over the Titans.

The final of many quarterbacks brought in to replace Jay Fiedler, Feeley was traded to Miami for a second round pick, but could never really earn the starting job until the end of a lost 2004 season. Feeley ended the year as a starter and took the Dolphins to a 3-5 record, including a victory over the eventual Super Bowl champ New England Patriots.

The prodigal son returned. Griese grew up in Miami and his Dad, Bob, was Miami’s second greatest quarterback ever. Brian couldn’t live up to his last name unfortunately. When Fiedler got hurt in 2003, Griese allowed the Dolphins’ great defense do the heavy lifting. His record as a Dolphins starter was 3-2, but he didn’t do much to contribute to those victories throwing only five touchdowns to seven interceptions.

The Piano Man started eleven games in the 2006 season, going 5-6. There was a little stretch where the Dolphins under Harrington looked respectable beating the undefeated Chicago Bears and the playoff bound Patriots and Chargers, but then Joey blew the final three games.

Huard played great in Marino’s absence in his final season, going 4-1 as a starter. He only started one game for the Dolphins after Marino’s retirement, but it was a big one. In 2000 he helped the Dolphins beat Peyton Manning’s Colts 17-14, allowing the Dolphins to beat out Indianapolis for the AFC East division title.

Frerotte signed with the Dolphins in 2005 and took them to a more than respectable 9-6 record, where he threw 18 touchdowns to only 13 interceptions. The problem was most of those victories came after the playoffs were no longer a possibility after starting the year 3-7.

I remmber the 2009 Monday night game against the Jets like it was yesterday. Henne looked like the heir to Marino with his big arm completing 20 out of 26 passes with two touchdowns to beat the Jets. The good times didn’t last. Henne quickly fell down to Earth leading Dolfans further down to Hell.

Moore was the back-up quarterback for Miami for seven straight seasons. Interspersed with clipboard duty from 2011-2017, he got to start 17 games. None more important than in 2016 when Ryan Tannehill got knocked out. Moore won three key games, taking Miami to their only playoff berth with Stephen Ross as the owner. Moore started that lone playoff game against the Pittsburgh Steelers where he took one of the nastiest hits I’d ever seen.

Probably the most controversial placement on this list, Tua has led the Dolphins a 13-8 record as a starter, throwing 27 touchdowns to only 15 interceptions. The problem is in his first two seasons any time Tua had to play a must win game he’d play awful. Tua will have at least this coming 2022 season to see if he can earn a higher spot on the list.

The Dolphins were supposed to lose as many games as possible in the 2019 season, but Ryan Fitzpatrick didn’t get the memo. He led the Dolphins to a 5-8 record including victories against the defending Super Bowl champion Philadelphia Eagles and that year’s eventual champ, New England. In 2020 the Dolphins drafted what was supposed to be a can’t miss prospect in Tua Tagovailoa, again Fitzpatrick went against the team’s plans, playing too well to stay benched. When they did bench FitzMagic, he saved the Dolphins season for at least one week with this miracle comeback against the Raiders.

I’d always been Ryan Tannehill’s biggest critic. From the time we drafted him way back in 2012 over Russell Wilson, I thought he was a bum. His constant check downs, his lack of  pocket awareness, his penchant for throwing an interception or dropping a fumble at the worst time always drove me nuts. But then he left Miami and found immediate success as a Tennessee Titan. He took them to the playoffs multiple times including all the way to the AFC championship, leading me to realize after the break-up it wasn’t him, it was us.

Pennington was always a thorn in the Dolphins side. As the Jets QB he crushed us so many times. In 2008 he joined the Dolphins for the surreal Wildcat season leading the Dolphins to their only division title over the last 20 years. He led the Dolphins to an 11-5 record, throwing 19 touchdowns and only 7 interceptions. Not gaudy numbers, but it was impressive enough to get him second place in MVP voting, the closest a Dolphin has come to the award since Marino won the 1984 MVP.  But three games into the 2009 season Pennington suffered a shoulder injury leaving him a one season Dolphin wonder.

The first guy to start a game after Marino retired, ended up being the best.  Fiedler started 59 games over the course of five seasons. His record as a starter was 36-23, leading the Dolphins to four consecutive winning seasons. And it would have looked even better if it wasn’t for going 1-6 over the 2004 dumpster fire of a season when Ricky Williams retired right before the season started. Fiedler’s stats were downright ugly, but he played with a lot of heart. Never more so than on the first Dolphins game after 9/11 when Fielder ran for the last minute winning touchdown against a great Raiders team that got him on the cover of Sports Illustrated back when that meant something.  The Dolphins kept trying to replace Fiedler. It seemed with their dominant defense and great running game they should have done better than going 11-5, 11-5, 9-7 and 10-6. But with the ragtag crew of quarterbacks that Miami has lined up under center the last couple decades, the Jay Fieldler era now looks like glory days. 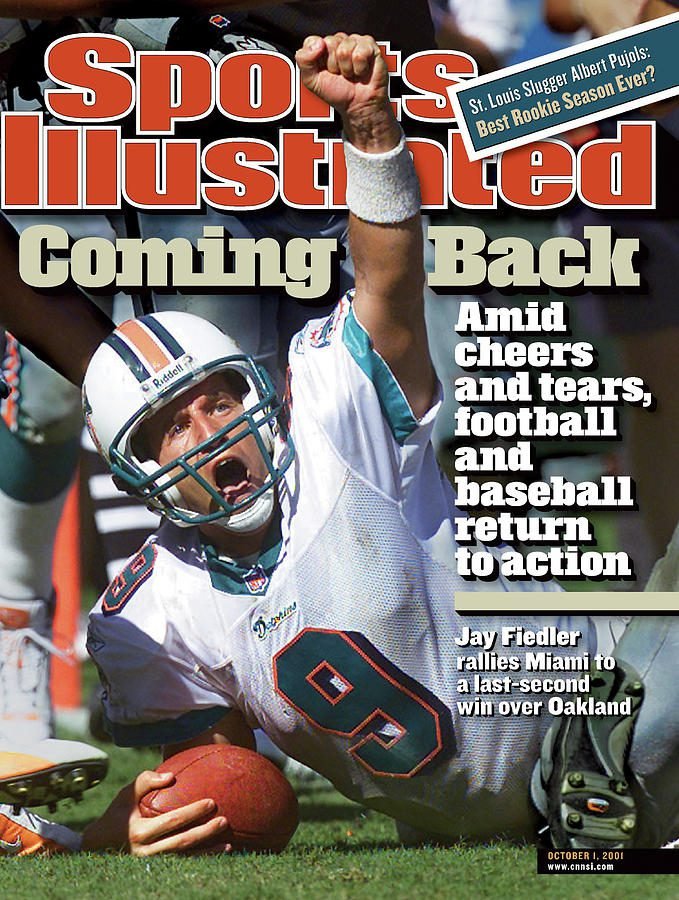