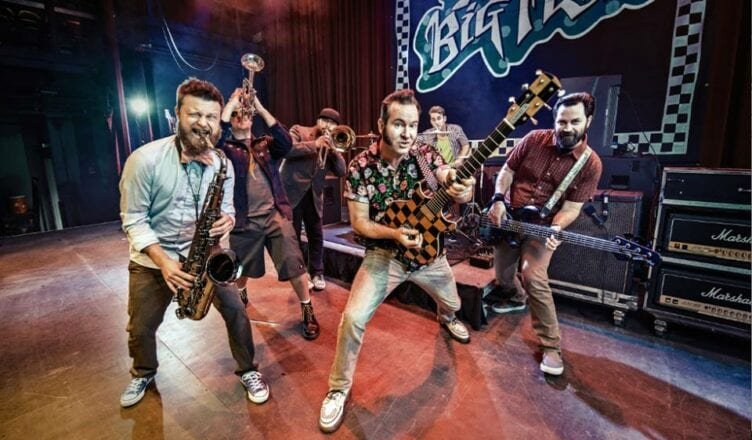 We were all teenagers. We have all been through the physical and emotional changes that accompany puberty and high-schooler angst and rage. Everyone’s experience during those awkward golden years vary, but there always seemed to be a universal love among all our classmates—a love for ska. I first heard Reel Big Fish when I was fourteen and went down a rabbit-hole of albums and covers by the ska godfathers. The rhythmic upstrokes of a guitar paired with an exuberant drum pattern and vivacious horn section that that evolved out of reggae and punk made you forget all about the pain of not passing your driving license exam first time around.

First time I saw the band was at Vans Warped Tour in West Palm Beach back in 2011. I remember the hot summer sun roasting the crowd as the stage crew set up, but it was all worth it as the band played their signature classics to a crowd of deprived and angry young folk.

Yet, ska is still holding its weight. The crowds can ranges anywhere from children to the elderly and everyone in between. The genre has endured with its good nature and hidden cynical themes; and there is no exception to Reel Big Fish, who released their longly-anticipated album Life Sucks…Let’s Dance! back in December. The group—who is known for their good humor and bonhomie on stage—will be back in Florida, more specifically, Fort Lauderdale, in November to play at Riptide Music Festival. In light of this, Jitney was able to interview its lead singer and guitarist, Aaron Barrett, and talk about Reel Big Fish legacy from humble beginnings in the 90’s to playing all over the world with a stalwart fan base.

Why has the sound of ska stayed unchanged for so long? What makes the rhythm so infectious?

Aaron Barrett: I don’t know, maybe… Everything that can be done with it has already been done. But I honestly don’t know. They mixed every style of music with it and it’s the sound that everyone loves and everyone still loves, so why change it? I think its infectious because it’s really bouncy and edgy with lots a lot of energy—It’s all those upstrokes on the guitar!

Life Sucks…Let’s Dance! saw great success with both fans and critics. It’s been about a year since the release—are you guys working on any other new projects?

Well we waited five years for this one, so… I think we’re going to taking a little bit more of a rest. My manager is already talking to me about doing a new album, but it hasn’t even been a year yet—December will be a whole year. I have been wanting to make a new live album because it’s been over ten years—that was 2006. But I’ve never been in any real hurry to release a new album. I write songs all the time that once I feel like I have enough good ones worth keeping, then I’ll release an album. And people like our old stuff from the 90’s, it’s what they want to hear and that is fine with me.

Other than the music, Reel Big Fish is known for their humor on stage. Does humor balance out some of the darker themes of your music?

A lot of it is that I just thought it was really funny to have a real wacky sounding music with depressing, angry lyrics, It’s kind of shocking to people. I guess that’s why I started doing it—I thought it was funny. It’s why I do anything in this band. If its funny, I’ll do it! We try to be funny on stage. A lot of people like to use the phrase ‘dad jokes.’ We get that a lot.

Warped Tour wrapped up its final year last summer. You guys have often been regulars on the bill throughout the years, in fact, I first saw you at Warped Tour. How did it feel closing it out?

We’ve been doing Warped Tour since ’97 and I went to my first Warped Tour in ’96. The festival really helped our career in so many ways, so yeah, it’s really strange to see it ending after we’ve been through all the changes to watch it grow and mutate. It became its own scene. I heard the word ‘bittersweet’ being thrown around a lot, like a lot. Our first year was ’97 and that was awesome: Blink 182, The Vandals, Sugar Ray, Ice-T… Crazy. Ice-T! You always remember your first time doing that. So that will always stick with me. A lot of energy and I went stage-to-stage to watch all my favorites. Playing my own set was amazing.

Reel Big Fish’s touring schedule is almost infamous. Does it get any easier with time?

The last couple of years we’ve had a few months off. But we’re getting ready to go on tour now, we’re touring until December and we were touring all summer. It’s nice people still want to see us. You get use to it, but it’’s still hard on your mind, you have to sit around a lot with nothing to do. But it’s been awesome traveling all over the world and making people dance. I think we definitely have a better attitude now then in the old days when we were cranky.

What is the future of ska?

I don’t know, but there is a lot of exciting things happening right now. I heard a ska song on the radio recently, that was cool. There’s a ska documentary that just came out called Pick it Up. I know there are a couple books about ska coming out. So, I think there is a kind of  resurgence—people are nostalgic about it. It’s not so much a guilty pleasure or a dirty work anymore. People are coming around saying, ‘Ah, you know what was good? That ska music.’ And a lot of people are bringing their kids now, its sort of becoming a family thing. It’s really interesting. Twenty years ago it was ages 16 to 22. Now it’s 5 through 85. It’s nice! A little something for everybody.

Do you believe in luck?

Luck has been everything to do with it. There’s just no way luck doesn’t exist for me to be doing what I am doing. I’m the most lucky person ever. I have worked hard and tried really hard, but there’s definitely a lot of luck involved. There’s been a lot of people who are more talented than me and way better musicians and songwriters who haven’t gotten anywhere. I am just really lucky to be in the right place at the right time.

Riptide Music Festival is from November 23-24 at Fort Lauderdale Beach Park. Tickets can be purchased here.

View all posts by Grant Albert →