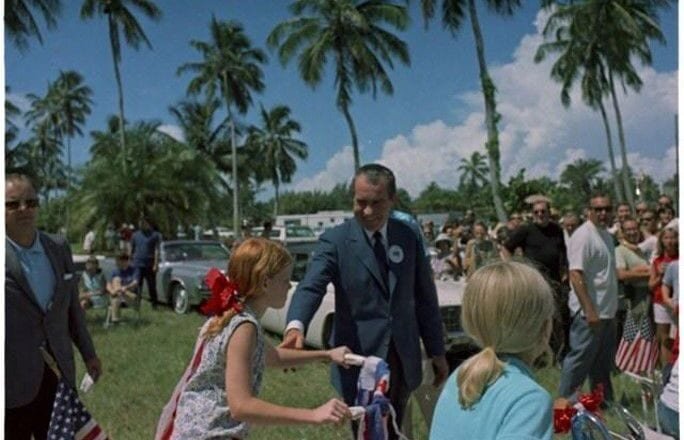 Before Donald Trump dubbed Mar-a-Lago his Winter White House, another polarizing president called his South Florida vacation home the same exact thing. In 1969 Richard Nixon bought a waterfront house off Harbor Drive on Key Biscayne. Over the six years of his presidency he visited the house over fifty times.

Nixon was first associated with Key Biscayne when he met John F. Kennedy after the 1960 presidential election at the old Key Biscayne Hotel. The hotel closed down in 1987, but after they razed the hotel they kept that villa standing for close to a decade, eventually building The Ocean Club condos on the site.

The former president was first drawn to Key Biscayne by his close friend Bebe Rebozo. The friendship cost Rebozo as he was indicted for money-laundering a $100,000 donation to the Nixon election campaign  Despite the criminalities, Rebozo wasn’t all bad. The Key Biscayne Bank he owned would give local kids free popcorn on Fridays and hosted a spooky haunted house every Halloween.

Like all things Nixonian, his Winter White House  was also tainted by scandal. Nixon bought the house off Donald Berg for less than face value, a man the White House later advised he stay away from due to his Mafia connections.  But it became Nixon’s place of choice. He built a private beach and a helicopter pad. Key Biscayne was where according to Rebozo, Nixon had first heard of the Watergate break-in. It was also where  he chose to ruminate as that scandal ended his presidency.

Growing up on Key Biscayne I once had the opportunity to visit the house. A classmate’s Dad had bought the property. At the time I was more intrigued that the house had been used as Tony Montana’s house in the movie Scarface, but a ton of history happened under that roof. And in 2004 that history was torn down, by new owner Edgardo Defortuna.

For those who’d like to see footage of Nixon relaxing on Key Biscayne the 2013 documentary Our Nixon is worth watching. It has a ton or archival footage of Richard Nixon on the Key. For further reading on Nixon on the island it’s worth checking out this 2017 Islander News story.