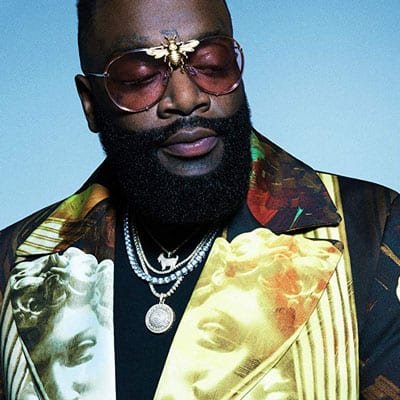 On a day when Hurricane Dorian wreaked havoc on the Bahamas and threatened his hometown of Miami, it was only fitting Rick Ross was discussing a memoir he titled  Hurricanes. The rapper with five #1 albums thought it was obvious why he gave his autobiography that name. “As beautiful as the city of Miami is, a hurricane can hit and fuck everything up.”

Ross said over the telephone that he got the idea to have his journey written down after a health scare last year. “I woke up in the hospital with all my homies in there. We talked about where we came from and I knew I had to get it down.”Hurricanes  goes into  Rick Ross’ successes and his controversies, how he wrote songs like “Hustlin'”, the origins of his beef with 50 Cent, and the news report that Ross had once been a correctional officer which he originally denied.

When asked if the book was how it all went down, Ross was honest, “I don’t know. I haven’t read it.” You haven’t read your memoir? “I didn’t think it was necessary. I lived it. I’ll watch the film.”

So that meant the heavy lifting was done by co-writer Neil Martinez-Belkin. “I thought he was an undercover agent,” Ross joked. “I took my time to get to know him. He understood how powerful my story is.”

Hurricanes convincingly translates Rick Ross’ voice to the page. When discussing why Rick Ross  originally denied reports that he was once a correctional officer the book says, “No girl had ever denied me pussy and no nigga had ever stepped on my toes over me being a correctional officer.” On describing the sound he was going for on his debut album, “Production that captured the allure and mystique of South Beach with lyrics that spoke to the other side of the bridge. That recipe became the driving force behind the sound of Port of Miami.” Probably the coolest part of the book is after detailing a story from Ross’ life it follows with the lyrics from one of his songs and you see where fact and hip-hop mythology coincide.

On September 9 at 7:30 at Miami-Dade College’s Chapman Conference Center Ross will present his memoir where he says, “People can converse with me. We’ll have a room full of people that have read my memoir and have interesting questions. So many people have so many questions.” Attendees who buy a ticket for this event presented by Miami Book Fair and Books & Books, get a copy of Hurricanes and the opportunity for Ross to sign it. He said the message he most hopes gets relayed from the book is that people take one step at a time. “I never gained a lot at one time. You gotta start small and dream big.”

Big dreams that recently came true for Ross include a couple sequels. Last month he released his new record Port of Miami 2 which he described as “Homegrown and natural.” He also just finished filming a role in Eddie Murphy’s new movie Coming 2 America which blew him away since the original Coming to America was one of his’ favorite movies growing up in Carol City.

As cold blooded a criminal as Ross is described in Hurricanes, a sentimental side came up when Ross spoke about hurricanes. “I’m praying for the Bahamas.” Ross said before reminiscing about his experience with Hurricane Andrew back in 1992. “I was in Miami. It was fucked up. The guy that taught me (in high school) discus and shot put only had one arm. He stayed down South and his house was obliterated. We all got in a truck passed Coconut Grove and saw all the destruction. We helped him move out all his stuff then we came back home and cleaned up.”