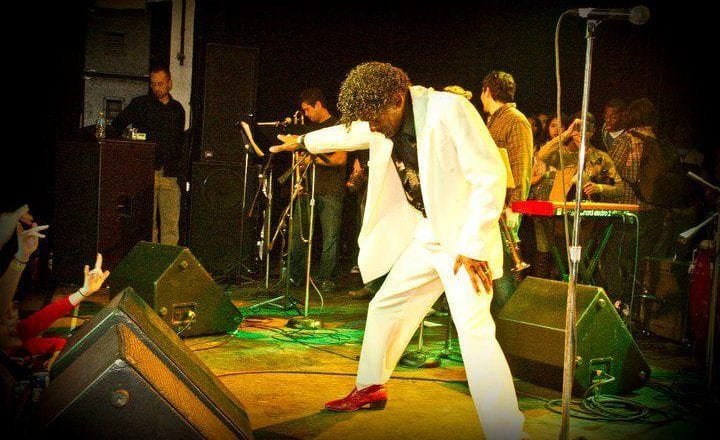 Soul music maniacs have paid up to thousands of dollars for Rickey Calloway original records. His 1968 track “Tell Me” is considered one of the seven wonders of the world of funk.

He is a James Brown style player of the highest order, he has rocked out with The Dap Kings; and for certain heads in ye olde England, he’s more famous than Prince Harry.

Ever since he started recording in the 1960s, Calloway’s dream was to work with Miami’s own Henry Stone; and In 2010, he finally did it. And this August 9, Calloway’s dropping a brand new album of remixes, instrumentals, and total break downs direct from his original studio tapes. DJ Le Spam and Joe Stone went through every note and brought the funk to life in a new way. Here’s what Rickey Calloway had to say about cops in Jacksonville, funk in The Bahamas, and Miami in 1974.

When did you start performing in clubs?

Rickey Calloway: When I was 15 I was known as James Brown #2, and I used to sneak out of my mother’s house at night in Jacksonville and go perform in the clubs for five or ten dollars. When the police showed up, I had to hide behind the bongos.

How did you first hear James Brown?

The first time I saw James Brown, I was a little boy in elementary school and went to Ritz Theater in Jacksonville; and I saw him in a film with the Rolling Stones, The Supremes, Marvin Gaye, Aretha Franklin, and Jan and Dean from the 50s…it was a really big screen. We couldn’t go to their concerts at the time. I had never heard of James Brown, but the screaming and the hype caught my attention, so what happened is after I saw the film a few times, I started impersonating James Brown at school during recess. I kept on and on, turned it into a real career, and I never stopped.

How did you meet Henry Stone?

I met Henry Stone in like 1973 or ’74, when I had a record out called “Get It Right.” At the time, he was huge. He said he wanted to put my record out in Nassau, Bahamas. He told my manager, “Can you bring me 3,500 copies by tomorrow?” Well, we only had about four hundred copies, but we didn’t wanna blow the deal, so we said, “Yes!” We called a guy in Memphis and told him that Henry Stone needed 3,500 copies. The guy said, “It ain’t gonna happen.” Me and my manager Doctor Cool had to tell Mr. Stone that we couldn’t get the records and the deal went down the tubes. The last thing Henry told me was, “When you get some more songs, call me.” Well, the way it worked out, I couldn’t get another appointment with him until 2010. I always wanted Henry Stone to put out my music. It was one of my dreams. From 1973 to 2010, I had that dream. I’m so glad and happy that it happened. I worked with lots of labels over the years, but every time I spoke to Mr. Stone, I laughed. I knew he had his heart in it. I knew he was honest and he would treat me fair, with respect, like a gentleman. In this music business, you have to be careful who you’re dealing with. But, him I always trusted.

It was the best. If I could go back and recapture that sound … it was beautiful. It was a time. Back then, we weren’t worried about money. We were playing for free. Now, it’s so commercialized. It’s different. We were family. We were close. I was involved with Frank Williams and The Rocketeers. I did shows with bluegrass artists. Can you imagine doing James Brown for all white country western fans? They loved it. They loved “I Feel Good.”

We could give you the best R&B, funk, soul, and disco. We got down, and we got nasty, and we let it all hang out.

View all posts by Jacob Katel →