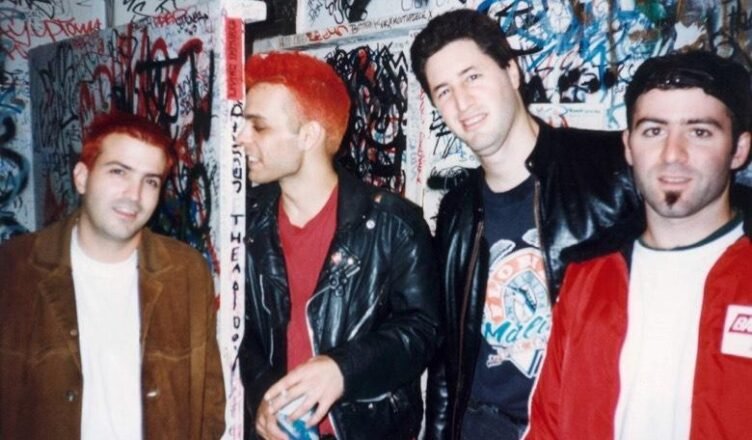 Vocalist/guitarist Rob Elba co-founded the Miami alt/punk powerhouse The Holy Terrors in 1990 with childhood friend Dan Hosker on lead guitar. They managed to conquer the vibrant early 90s South Florida music scene. They toured the South and Midwest, opened for national acts like Jellyfish, Danzig, and Morphine, and released a live EP, a full length, and a retrospective. After a tragic accident took Hosker way too soon in 2012, the band effectively came to an end.

Elba forged on for a time with a new project called Shark Valley Sisters, and still occasionally plays out with Gold Dust Lounge. He currently hosts a long-running weekly podcast called “That Record Got Me High” which streams everywhere and breaks down classic records. One other passion project he continues to be involved with to this day is the Dan Hosker Music Continuum, a scholarship program started by the late guitarist’s sister Chris Hosker-O’Brien, that benefits students from Dan’s alma mater in Boston, Bishop Fenwick.

Now in year ten, the DHMC continues to bring together musicians from the scene and raise money for the cause each year right around Hosker’s birthday. We asked Rob about Dan, the Terrors, music, podcasting, and the upcoming DHMC, which is scheduled for Sunday, December 11, 2022, at Tarpon Bend River Brewing (280 SW 6 Street, Fort Lauderdale, 33301), from 11 a.m. to 7 p.m.

What new artists are you listening to today?

Rob Elba –The English Riviera by Metronomy. Little Eden by The Bevis Frond

What’s your earliest memory of Dan?

Around 1984, I had placed an ad in Rag Magazine looking for musicians to start a band and Dan answered it. We met up at a record store. Vibrations? And we were both dressed exactly the same: faded Levi’s and a tan army shirt with the sleeves cut off.

What is your favorite Holy Terrors memory involving Dan?

We had been back down in South Florida about a year, had formed the Holy Terrors, and were playing a show at Washington Square. I just remember there being a nice crowd there – people were starting to come out to see us play – and looking across the stage at Dan and we were both smiling. We both realized we made the right decision to move back down here from Boston.

What was the most exciting gig for the Holy Terrors?

We played a show at Squeeze called the “Midnight Summer Scream”, with Jack Off Jill, Load and us. I just recall it being a raucous night. It really felt like there was a buzz down here – the mood was electric!

What was the most unique aspect of Dan’s musicianship?

He never took the easy way out. He was always looking for a different way to approach a song. It was never, “show me the chords”. It was always, “Just play it a little and I’ll come up with something…”

What is your lasting impression of what Dan’s life and music meant to the South Florida scene?

Dan always made everyone around him feel included. He just loved playing music, and he didn’t give a fuck if you were cool or a dork or whatever. He was always down to jam, create or just talk. To everyone. He had this quiet, welcoming energy that made anything he was involved with better.

What got Rob Elba into podcasting?

Who has been your most interesting podcast interview subject to date?

I’ve had Mike Watt on a few times and he’s a hoot! His knowledge about and sheer love of music is infectious. “Our band could be your life” indeed!

What are your thoughts on this being the 10th DHMC?

I’m of course sad that our friend Dan has been gone so long, but I’m also grateful for those who are still willing to gather together and celebrate his love of music. It’s been a rough past couple of years and I’m really looking forward to seeing friends – both old and new – in person!

What are you most looking forward to on December 11?

Everyone who’s playing will be doing at least one song by another local band/artist. I’m excited to hear what everyone comes up with, but if I can be honest and a little selfish I’m most excited to be playing a few songs by some other local bands with my friends Will Trev and Javi Caballero and my daughter Cori!