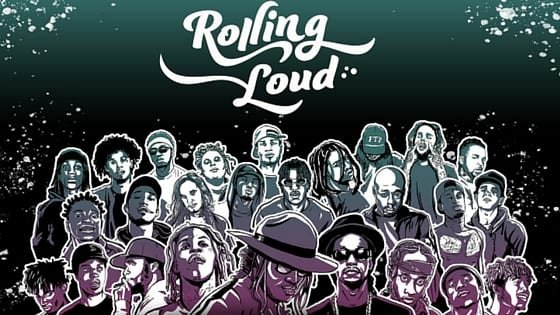 After just four years Rolling Loud has become the world’s largest hip-hop festival. It had an inauspicious start as a one night show at Soho Studios in 2015, turned into a two-day event in 2016 at Mana Wynwood, 2017 had three nights at Bayfront Park, while this year’s three night show will be at Hard Rock Stadium from May 11-13. At this rate of exponential growth expect the 2019 Rolling Loud Festival to last a whole month and need to be held over the entirety of Miami-Dade County.

While last year’s line-up had more rappers who were critically beloved like Kendrick Lamar, Run the Jewels, and Flatbush Zombies, this year is more a survey of what in hip-hop is commercially  successful today. The headliners are J. Cole, Travis Scott, and Future.

Supporting acts include chart toppers like Migos, Post Malone, and 21 Savage. Looking through the nearly 100 names on the roster, you see this is not a show for the old school. There is some local love with Miami legends Trick Daddy, Trina, and Rick Ross, but when you realize Lil Wayne is one of the elder statesmen on the bill, you realize we have fully entered a new era in hip-hop.

If the first generation of rap started in the late ’70’s with Grandmaster Flash and The Sugarhill Gang freestyling silly rhymes over scratched records and continued into the ’80’s with the commercial breakthroughs of Run DMC and LL Cool J. The second generation probably began in 1991 when NWA’s Efil4zaggin topped the chart and rappers like Eminem and Snopp Dogg became global phenomenon. While their peers Tupac Shakur and Notorious B.I.G. became fallen martyrs who like Jim Morrison and Jimi Hendrix before them, died young before they could suffer any backlash.

Now we are into something new. Love or loathe what this new generation is producing you can’t deny Rolling Loud did an accurate job of curating where hip-hop is currently at. Your opinion on where hip-hop has found itself probably depends on what side of 1991 you were born on. But if the Rolling Loud line-up isn’t your thing you’ll have your turn in a couple weeks when Lotos Music Fest goes to Mizner Park May 27 with Cypress Hill, Bone Thugs N Harmony, and The Pharcyde.

This article was written by David Rolland, Miami music journalist and author of the novel The End of The Century.