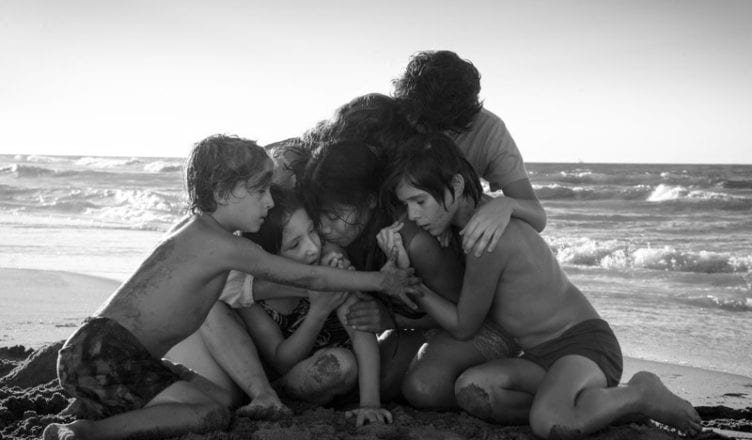 Roma opens with a long, serene shot of a tile floor. As the credits play over the black and white image, water repeatedly washes over the tiles, wave after wave. The soundtrack is made up of the ambient sounds from the location: the water, the humming of the woman washing the floor. There’s the low rumble of an airplane in the background, its reflection flits quietly through the temporary mirror of the water. The opening sets a distinct mood. It’s a distillation of the film’s techniques, a precursor of what to expect: a languorous odyssey through a specific time and place. And, oh, what a journey it is.

Based on director Alfonso Cuarón’s memories, Roma’s plot is simple. Taking place in Mexico City during the early ‘70s, the film follows roughly a year in the life of Cleo (newcomer Yalitza Aparicio), the woman washing the floor in the opening shot. She is the longtime live-in maid of an upper-middle class family. She is so familiar to Sofia (Marina De Tavira), Antonio (Fernando Grediaga), and their four children, that she’s almost family herself. As the year passes, Cleo experiences dramatic events in her personal life, upheavals in the family’s life, and plays witness to the political and social turmoil of the time.

While the plot is simple, what plays out around the film’s frames is anything but. There’s a quiet focus on the disconnect between Cleo’s status as family member and employee. When the chips are down, she is taken care of, loved. But she still is a wage slave, working non-stop from early morning until late at night, and when Sofia is upset (her marriage to Antonio is falling apart), she becomes verbally abusive to Cleo. And something is going on in the society around her. Talk of unrest, of riots, horrifying stories of soldiers shooting children because of a stupid water balloon prank, interrupt, in snippets, the calm of the everyday. The façade of normalcy is slowly eroded by these tensions, helping drive a narrative that would otherwise be placid.

Rubbing up against this tension is a hint of magic realism that never quite tips over into the magic portion but still suggests an otherworldliness. A man in costume singing in the middle of a forest fire; Cleo’s boyfriend, practicing martial arts, fully nude; a lengthy, hypnotic sequence in a training camp  that ends with a blink and you’ll miss it moment suggesting Cleo has the calm and serene self-control of a martial arts master. These moments surprise and help buoy the natural rhythms of the film.

None of this plays out in an obvious or familiar way. Cuarón, who won the Best Director Oscar for his last film, Gravity, is the cinematographer here (he also wrote the film’s screenplay) and his camera work remains at a distance, panning back and forth to capture the action, almost like high-gloss security camera footage. Close-ups are sparse and rarely directly cut to. Instead, if we get closer to someone it’s because the actor will come to the camera within an uninterrupted take. It’s fly-on-the-wall if the fly were an arthouse director. These techniques have a distancing effect, allowing the drama to breathe and be taken in naturally.

And what the camera captures is gorgeous from beginning to end. Shots are intricately planned out and attention grabbing. Light caresses the frame, and there’s an elegant use of focus. Usually, Cuarón sticks to a deep depth of field, like in the breathtaking shots of Cleo navigating downtown Mexico City or the countryside outside the metropolis where every object from up close to the camera to far in the background is in pristine focus. At other times, Cuarón uses a shallow depth of field to heighten the drama. During a harrowing birthing sequence, a devastating part of the shot, in midfield, is out of focus, while a person in the foreground reacting to it is in sharp relief, training our attention on the character’s emotions.

The film’s style elevates the banal, the everyday, and helps push the things that aren’t. It holds back to let you experience the images, the sounds, the dialogue, but at the same time, It’s not clinical. You have room to build interpretation, but there is an artistic eye guiding you. It’s a hands off approach that still has its hands on you.

I spoke to a colleague who felt the middle of the movie sagged in its pacing, another felt there wasn’t much to bring the viewer back again. Both have their points, certainly. The meandering narrative can be a little oppressive, especially in that middle section where its intentions are anything but clear. And you do feel exhausted by the end. It may not be something you’d want to rewatch immediately. But it’s a potent movie, remarkable for what it says and how it says it, anchored with a beguiling performance from Ms. Aparicio who perfectly presents a mousy, quiet demeanor that’s belied by an inner strength of spirit. True, I wasn’t exactly rushing to experience it once more as I left the theater, but I have the feeling I’ll be revisiting Roma again and again in the years to come.