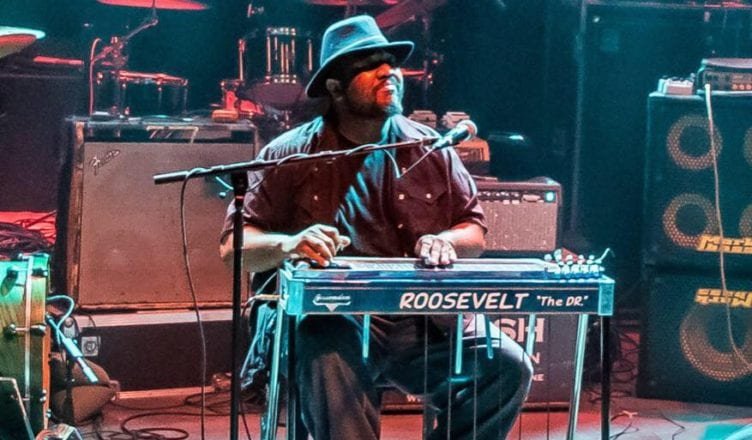 “People always ask why I called my new record Exit 16.” Roosevelt Collier, the local pedal steel guitar  legend said over the telephone. “That’s where I’m from. To get home all roads lead to exit 16 on the turnpike.”

The Miami born and raised musician felt he had no choice but to live a life of music.  “My family is music. I’ve been playing since I was 3. In church with my grandfather and uncles it was all about music.” One uncle in particular became his mentor on his instrument of choice, the pedal steel guitar, a horizontal console that produces a strong, twangy sound from its strings. “Glenn Lee taught me how to play when I was 12. He taught me like I was a baby. When he died when I was 17 it felt like my calling to keep going.”

Collier found one of his major musical influences when he was a student at Miami Killian High. “A friend gave me a tape to listen to and said it would change my life. It was Stevie Ray Vaughan. Listening to it a light bulb clicked.  I had to ask my friend who is this and do you have any more of it?”

Collier took Vaughan’s bluesy guitar and translated it to the pedal steel guitar both as a solo artist and with his family’s band, The Lee Boys. Collier’s played with a who’s who of notable musicians, but he sucked his teeth when asked who he was most nervous to play with. “I don’t get nervous. I will tell you playing with Derek Trucks was the most fun. Opening for B.B. King was mind blowing. Standing on stage with The Allman Brothers and playing with Phil Lesh were dreams come true.” As far as a wish list of future collaborators Collier has two names, Kendrick Lamar and Stevie Wonder.

For now he will have to relent to playing a free show Friday night, December 21 at 9 p.m. at The Wynwood Yard.  “It’s going to be a party, bro. Everybody’s about to get down. I wish I could get all my homies on stage with me,.I’ll be backed by Electric Kif.  Juke will be playing too. I never know exactly what’s going to happen, but it will be a party 305 style.”

Beyond this show and keeping doing what he’s doing in mastering his instrument of choice, the father of three has one more long term goal. “I keep looking for someone to invest. I want to open a live music venue in Miami. A real deal mid-size club for live music.”