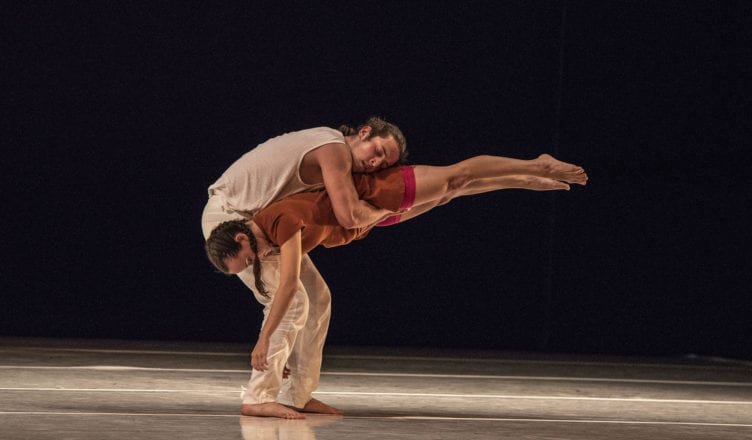 After almost five years (damn, time flies) Rosie Herrera and her Dance Theater are back in Miami. This past weekend they performed a short, powerful, relatively new work called Carne Viva at The Miami Light Box. Loosely translated to mean “open wound” Carne Viva builds upon the themes of religion and romance.

They introduced us to a tense, gripping emotional examination between man and woman, lover and partner.

In the next section we meet Loren Davidson and Rosie Herrera for a piece layered in religious symbolism featuring  a wildly almost humorous use of bologna. The third act of this trinity featured Batanero and Davidson in a visceral love / hate tug-of war. It felt bumpy, a ride on humanity’s roller coaster of change.

Ivonne Batanero, at 5’1″, is small in size but powerful in stature. She carried this piece, both literally and figuratively, and her body alignment and movement felt coordinated, controlled and even charismatic.  All four, as is the case with the RHDT, were beautiful.

Rosie Herrera is a Miami girl through and through. A Cuban-American dancer, she is a graduate from the New World School. She’s the best in dance we possess and it’s mesmerizing that it has been five years since we last saw her work at home. This is not due to a lack of material, but more so to a demanding tour schedule that keeps the Dance Theater on the road for most months of the year.

In Miami, there is nothing better than homegrown talent being shared around the country.

This crew exemplifies just that.

Luckily, if you like dance, they’re home. Armed with new work in the very near future.