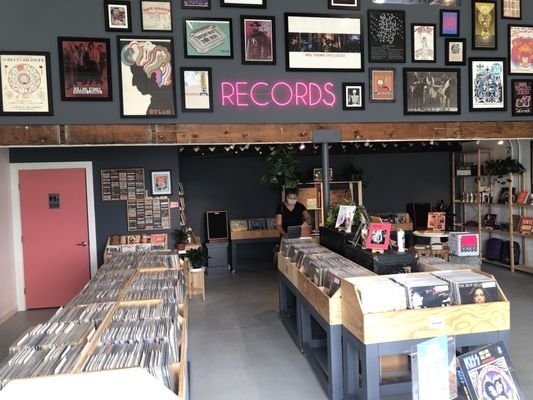 Belief in oneself is the catalyst to leading revolutions. But I digress, the revolution needs a soundtrack and these days it is probably going to be televised, marketed, and wrapped up in an easy to swallow package. Rust & Wax Record Shop was an idea, a n inspired concept. One birthed through a variety of forms (including pop-ups) before it finally forged itself into a brick-and-mortar location in Industry Alley. The owners, Melanie & Jesse Feldman had a belief that West Palm needed, nay, was starving for what they could provide: an outlet for music fans to explore genre and sounds without the usual judgement that is bestowed on those with less of a penchant for deep dives into rhythm. We see you music snobs… stow the heavy sighs and catch up to those eyeballs before they roll off your face.

Nah man, according to Jesse and Melanie, their new location is much more challenging because of the room to offer genre classifications. “In the old space (at Elizabeth Station) everything was just in alphabetical order, and it was much easier for us, but also much cooler for people to discover new things… These days it’s near impossible to split things into genre, Beyonce could be in hip-hop, soul, R&B and pop all at the same time!?” “There are so many artists playing with styles of music these days that is gets very difficult to label things.”

Jesse went on to describe how he has a love of funk, soul, and jazz, but how those genres have now built out into hip-hop and how that builds on culture in general. Melanie agreed and began talking about their new classical section, and just how difficult that will be to classify as there are current day composers who have a more “cinematic-esque” feel to their work that one simply would not recognize as classical. “Classical adjacent” she remarked.

The store was a leap of faith the couple took when they started the first version in 2017, there have many been ups and downs, especially during Covid lockdowns, but recently the couple quit their “day jobs” to run Rust & Wax full time. They believe that West Palm deserves a world class record enclave where all styles are welcome, and they have staked their future on it. The community can only thrive if everyone supports the cause. The power of belief in action, a revolution indeed.

View all posts by Tim Moffatt →