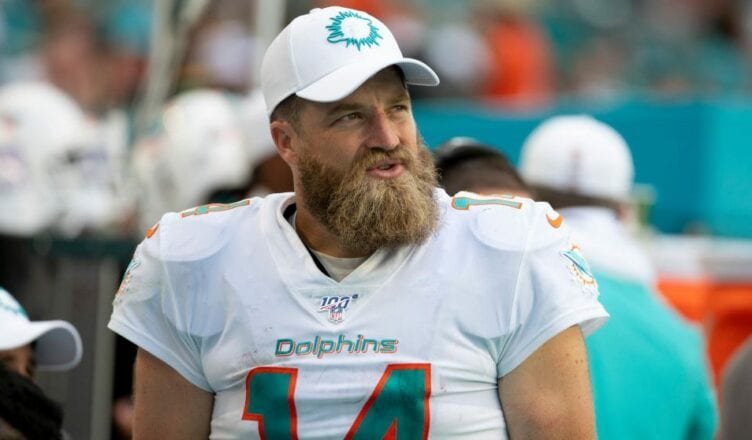 Magic is mysterious, unattainable and often inexplicable. Whether Unicorns or fairy dust, the illusions we conjure in our minds strictly remain in our minds. But what if one of these fantasies came to fruition, what would it look like? Ryan Fitzpatrick. This isn’t some well-dressed trickster on the Vegas strip weaving his way among scantily clad women, or the ex-con at your nephew’s birthday party reeking of sweat and Hennessey.

You’re not hallucinating, no one pulled a rabbit out of a hat.

Open the curtain and que the spotlights Ryan Fitzpatrick has dazzled thousands for years without the need for hocus-pocus or abracadabra’s. The 37-year-old 15 seasons deep is only the 4th quarterback since 1972 to lead his team in rushing and passing yards for a season.  Ryan Fitzpatrick and of, a dude named Lamar Jackson. Someone let the genie out the bottle. His magic carpet ride reached its pinnacle week 12 against the Philadelphia Eagles. Faced with a 4th and goal from the one, the play dubbed “Mountaineer Shot” featured the punter throwing a touchdown pass to the kicker.

Never has that happened before in NFL history. How did two players, neither of which have thrown or caught a pass in their life, spell up the play of the year? The true art of deception is misdirection at its finest.  Special Teams Coach Danny Crossman is credited with drawing up the play earlier that week but is it a coincidence Ryan Fitzpatrick was at the helm?

Fitzmagic’s game is more smoke and mirrors than stern gravitas. His talent is sleight of hand, not frankness or openness. However, with the Dolphins poised on drafting a quarterback this off-season Fitzmagic’s days as the starter may be numbered. And that’s okay. For his final trick may just have occurred in Week 17, when as 17-point underdogs, he led the Dolphins to an improbable win against the Patriots. A play that very well may be the beginning of the end of the Pats long reign. Certainly feels that way. But that’s magic for you.

Maybe Fitz can pass his wizardry to the next star down the line. His mere presence and magnetism may be enough to enchant those coming after him. Regardless, the next Dolphin signal caller is in good hands without having to pick a card or pull a quarter out of your ear.