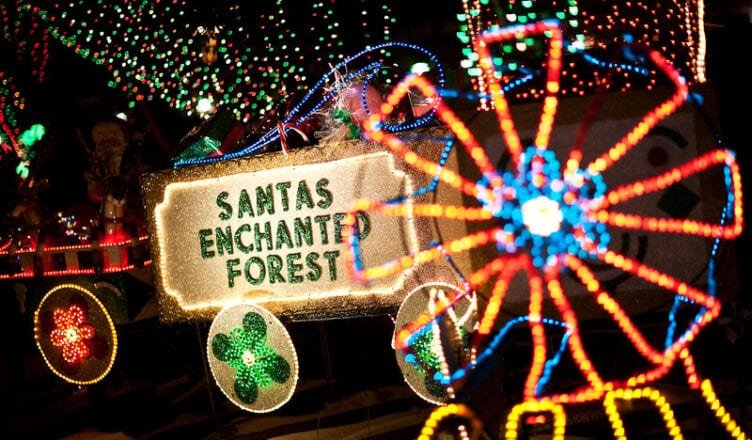 Most places know it’s time to get that yule tide feeling by their first first snowfall,  or at the very least, by the first nip in the air. Miami, of course, isn’t most places. With our tropical climes we need a less subtle reminder that the holidays are coming. And for the last 37 years that signal was the smell of deep fried foods in the air coming from Santa’s Enchanted Forest.

Billing itself as “the world’s largest holiday theme park” Santa’s Enchanted Forest has been a rite of passage for Miami kids since its opening in 1982. It set up shop every autumn in Tropical Park with a midway  jam packed with Christmas lights and carnival rides.

Back in what seems like the long ago era of March 2020, Miami-Dade County’s Parks Department ordered Santa’s Enchanted Forest to clear out of its Tropical Park home. The carnival’s lease had expired and they were not given the right to renew.

With Christmas seemingly far in the future the Festival pleaded with the mayor to let them stay for at the very least for one more year. No decision one way or another was ever announced. But as summer became fall it became obvious that the current danger in mass gatherings made a 2020 Santa’s Enchanted Forest an impossibility anyway. And so for the first time since E.T. played in the movie theaters Miami will be without Santa’s Enchanted Forest.

Will it ever come back?

The festival’s website posts “We look forward to a New Season in 2021! Bigger and Better than ever. See You Again in 2021!” But there are no details of whether it will be at Tropical Park or an alternate location or if it is just wishful thinking.