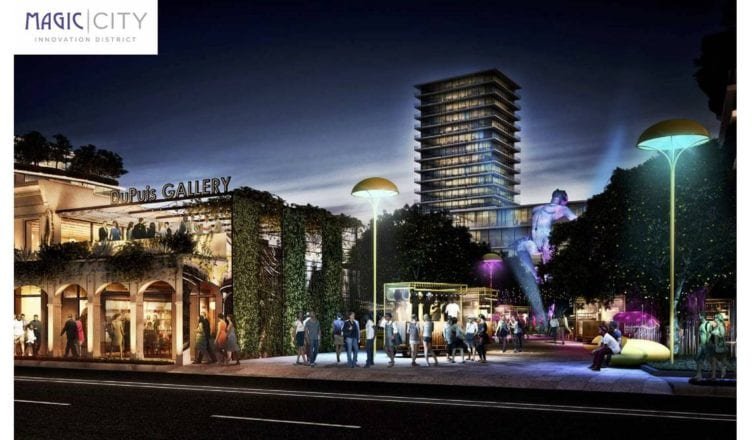 In a unanimous vote in the early morning hours Friday March 29, after another marathon City Hall Commission meeting, the commissioners gave their approval of the first reading for an SAP (Special Area Plan) for Magic City Innovation District.

For those who aren’t familiar with SAP’s I recommend giving this Miami Herald article a read to better understand the current state of mega-developments in our city and how they were able to find ways around zoning ordinances that average Joes like you and me still have to struggle through for the slightest improvements.

The basic idea is developers who have assembled at least 9 contiguous acres of property can get special permission to alter, ignore, or get around the established zoning codes where their properties are located. For example, if a property’s zoning normally only allows for acquiring a liquor license through an exception process this would normally require two public hearings which can drag out for months and even years. Thanks to the SAP process, mega-developers can request say, 10 liquor licenses in one shot, by right instead of by exception. Once they get the approval of their SAP they can decide to whom and when to give out those 10 licenses out at any time. Just like that…

Small business owners on the other hand have to struggle to make their way through the convoluted and unnecessarily burdensome bureaucratic process at the city and county offices in order to do something as simple as changing the use of a property. This ends up wasting precious time and resources just making sure paperwork is filed correctly to avoid having to resubmit endlessly for minor clerical mistakes. Meanwhile big developers can throw land use attorneys, expediters, and lobbyists at the staff tasked with reviewing the plans to bypass these obstacles without skipping a beat.

SAP’s have often been touted as a solution for allowing developers the flexibility to effectively “improve” a neighborhood; in theory benefiting residents in the community, but in practice actually giving them the perfect vehicle for rapid gentrification. The SAP tool actually just gives developers the means to bypass the standard procedures more quickly than small business owners struggling through.

In my experience it’s always been the eventual tenants occupying the properties which actually create the most positive economic impact, in a sustainable and long term way, as opposed to inflated and ephemeral. Rather than give glorified middlemen the opportunity to get their cut of the pie by getting in early and exploiting the system, why don’t we create a system that facilitates these smaller business (and property) owners actually getting a leg up and being able to achieve the same or greater results? Especially so that these tenants don’t get lured in with short term free or cheap rents, only to be replaced by cookie cutter chains a few years later once they’ve helped elevate the quality of life in the neighborhood.

Ever wonder why it’s become more and more normal for us to pay $10, $15 or more for a sandwich that used to cost you less than $10 a handful of years ago? Inflation, cost of living increase, better quality ingredients (sometimes anyways)… sure all that. But also because of the rent factored into a restaurant’s overhead. By unnaturally rapidly inflating the values of property in these neighborhoods, developers are directly contributing to retailers having to charge consumers prices that only people of a certain socioeconomic status can afford on a regular basis.

SAP’s have become the new norm in a developer’s toolkit, the modern version of real estate agents buying distressed properties, giving them a minor face-lift and flipping them for a quick buck. The problem with it is that it allows developers  to negotiate directly with municipalities for the right to their fiefdoms. This cuts out any real input from the community being directly impacted by the developers’ actions. They like to talk about community outreach, jobs, affordable housing. But much like with today’s politicians, these are just talking points and vague promises on paper. They don’t result in much actual benefit for anyone but the developers and the politicians.

Most people can relate to the memory of a parent or teacher shaking their head, and expressing their disappointment when we made the wrong choice in our youthful ignorance. “I’m not angry, I’m just disappointed” would come next, inducing more guilt and shame than would have come along with a beating or reprimand. Miami is a young city compared to the rest of the country’s major metropolitan hubs (NY, LA etc.), but City of Miami commissioners don’t get a pass based on “youthful ignorance” for their role in perpetuating an absurdly unjust system instead of acting in the best interests of the communities they are meant to serve.

Editor’s Note: At 2 p.m. on Thursday, June 27 a public hearing will be held on this issue at City Hall at 3500 Pan American Dr. which is open to all.