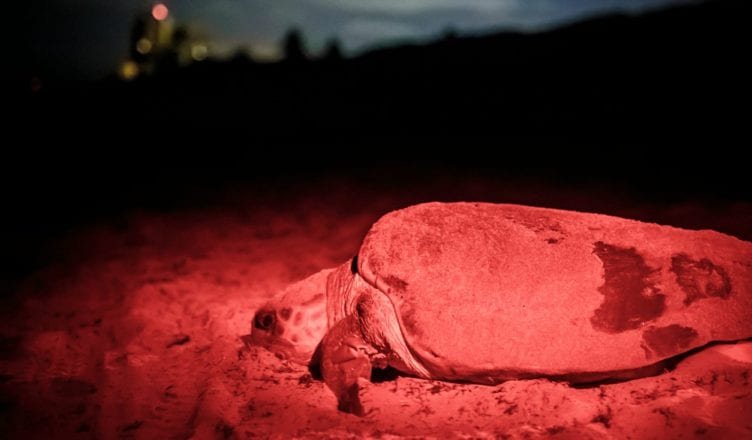 Eva Paulus is our resident Marine Biologist. This week’s interview covers sea turtle nesting season. We call this column “Eva explains why the world is going to sh*t and you need to see coral reefs today or never again.”

Eva: Depends on the species, but about 2 or 3 feet.

Where do females go after giving birth?

Well each individual female usually lays eggs a couple of times during a season. So a turtle will swim all the way to a beach in Miami or Ft. Lauderdale (sometimes from thousands of miles away) and then they mate and lay eggs every couple of weeks. So when they decide to lay eggs this season, they will stay relatively close to the coast and find male sea turtles in the area.

How do sea turtles know where to lay their eggs?

Surprising fact of the day: turtles don’t know where a good spot to lay their eggs are sometimes.

I think their whole evolutionary method of survival is just to lay 100+ eggs at the beach, and have millions of turtles do that within a few weeks, and then hope for the best. So...male turtles crawl out of the nest when they’re babies and never touch dry land again. Females take 25 or 30 years to mature and then they have to crawl with their heavy carapace along the beach and find a good spot. It is super tough because you can’t predict if there will be a storm and their nest will be flooded. Or if the sand dune will break and the eggs will be exposed and die.

How do we know where to put that orange barricade around them? Does it work?

So there’s some awesome people who patrol the beaches every morning and they can read the turtle tracks really well. Turtles suck at hiding where they laid their eggs (even though they try). So it’s usually relatively easy to tell where the nest is. In Florida there are no poachers as far as I know, so we’re just protecting them from tourists and beach goers with the tape. It also helps monitor the condition of the nest and the patrols can collect data on it, such as when the babies emerged.

There’s natural predators such as crabs or birds. But unfortunately we also brought some along…like dogs. In other countries, the eggs are poached unfortunately…but there’s some good initiatives out there to stop that, such as using decoy eggs with GPS trackers in them.

There’s another super sad thing about turtles…they have something called temperature-dependent sex determination. So when the sand is especially warm during incubation in the nest, they all turn out to be females. If it’s especially cold, they all become males. So now, due to climate change, the beaches become hotter and all the turtles are born as females.

It’s scary but there is a solution. You can provide shade to the beaches and experts can also water the nests with cold water.

Or incubate them under climate controlled conditions but that messes with natural selection.

They must be lonely, moving so slow, living so long?

They’re actually super fast in the water, if you startle one while scuba diving, they’ll be gone before you know it!

All species of sea turtle except for leatherbacks – as is obvious by the name.

Why is turtle egg season wondrous?

Because it’s the miracle of life. I think turtles are an animal many people adore and we all know that only very few of those cute little babies will make it to adulthood…so it’s a really special thing to see. There’s turtle walks all over Florida where you can learn more about turtles and see them laying eggs in the evenings.

Any final thoughts on turtle egg season in Miami?

Don’t be scared if you see one crawling out of the ocean. You’ve been blessed by the nature gods, just sit. Don’t move, don’t get closer. DON’T TURN ON ANY LIGHTS OR YOUR PHONE. Be quiet, and enjoy the amazing spectacle of a mama turtle laying eggs. Turtles are facing so many challenges, from eating plastic bags because they think it’s a jelly fish and dying with a ‘full’ stomach, to horrible viruses and boat strikes.

But, something we could really improve on, every one of us, is that they need darkness at the beaches. The mama turtles are trying their best to choose a good beach for their babies…but then, light pollution becomes a problem, because it is everywhere in Florida. Baby turtles find the ocean by going towards the brightest light, which used to be the stars and the moon reflected in the ocean.

But now it is the cities and the street lamps and the roads. So instead of running towards the ocean as fast as possible, they end up being run over or die due to dehydration far far away from the water. If you live close to the ocean, inform yourself on which lights cause the least light pollution. And to all the beachgoers at night: turn off that flashlight, stop looking at your phone, you might get to see something cool.