“It’s hard for even us to describe our sound,” explained Seafoam Walls guitarist and singer Jayan Bertrand to The Jitney. The four piece Miami band does its best on its Bandcamp page listing  jazz, shoegaze, indie rock, and hip-hop as influences and dubbing their genre as South Florida Caribbean Jazzgaze.

If you’re interested in seeing and hearing whether Seafoam Walls is sufficiently Florida sounding enough, you’ll have your chance Sunday, August 28 at 8 pm at Gramps (176 NW 24th St, Miami) when they play a free show sponsored by Sunnyside Dispensary, Jitney Books, and PureHoney Magazine. The concert, the band says, will feature a bunch of previously unreleased songs that are heavier and a bit faster than what they normally play. “We’ve also been working on some cool transitions,” Bertrand said. “We’ve got some new intermissions we can play between songs. We’ve been looking for variations of what we’ve been giving.” 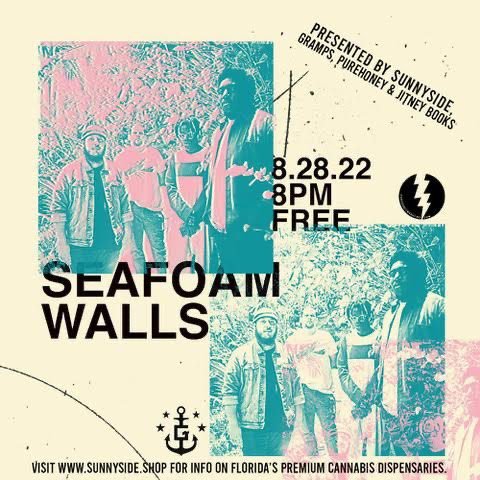 They’ll also play some tunes from their 2021 album XVI, which as a music critic for Miami New Times I nominated as the best local album of the past year. “Those were songs written in my early twenties,” Bertrand who is about to turn thirty said. The Roman numerals that make up the record’s title were easy for him to explain,  “My Dad and I were both born on the 16th. I named the album in tribute to my Dad who passed away. I felt it honored him in displaying the music he passed down to me. A lot of the album asks what does it mean to be a decent person when struggling with humanity and seeing the stuff you see in the news.”

The album XVI and the band that made it found an ardent supporter in Thurston Moore. The former Sonic Youth frontman released the record on his  Daydream Library Series label and is bringing Bertrand on his European tour as an opener. Bertrand is hopeful he can bring the rest of the Seafoam Walls band across the Atlantic for a couple European gigs. “All the doors Thurston has opened for us based on the announcement alone has been huge. The publications we got reviewed by we couldn’t have imagined that happening. We got a booking agent out of it and we’re looking for a manager.”

Since the August 28 show at Gramps is sponsored by Sunnyside Dispensary the band was glad to share how cannabis affects their creative process. “It gets me in a vibe where I’m chilling and more open to ideas to throw some paint on the canvas,”  explained drum sampler Josue Vargas. Bassist Joshua Ewers agreed, “It gets me loose and a little bit out of my own head.”

And for Bertrand cannabis has been a key ingredient not just for Seafoam Walls, but every musical project he has been a part of. “I don’t know if it makes you play better or worse, but your connection to music feels stronger with it. It definitely gets me more absorbed in the music.”