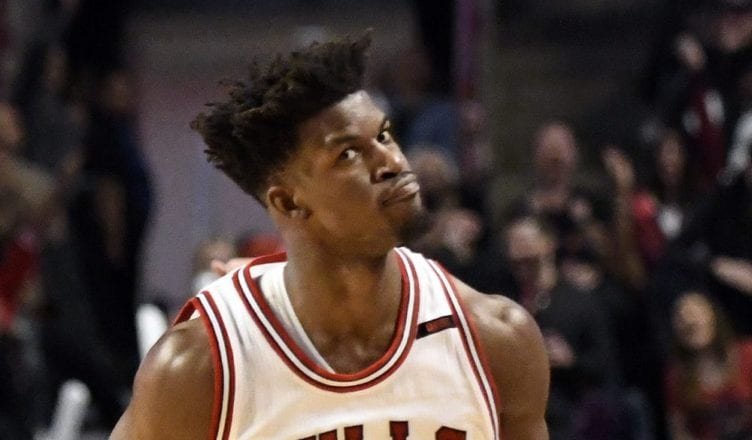 Even though the NBA season is a month away, the Miami Heat are the talk of the sports world since All-Star forward Jimmy Butler said he wanted to be traded from the Minnesota Timberwolves to the Heat. We asked Miami Heat superfans Michael Butterworths and Arturo Gaudi their thoughts on Butler joining their favorite team.

Do We Want Jimmy Butler

Michael Butterworths: We do not want  Butler on the Miami Heat.

Arturo Gaudi: Bro, come on, why you doing him dirty?

No offense. Dude’s a baller for sure. Arguably, top 15 player in the league. He’s got mad skills, super clutch.

But, and this is a huge but…

We do not want to break up our core future. If we have to give away either Josh Richardson or Justice Winslow or Bam Adabayo, it is not worth it. Those three are future all-stars, or in J Rich’s case an all Defensive Team, 2nd team at least, player. And it seems virtually impossible to acquire Butler without losing at least one of those assets. Therefore, don’t do it!

Oh shit, I didn’t know you were one of those Heat fans come lately. Let me educate you, son, Butler was on the team with Wade and Odom and Eddie Jones back in the day.

That was Caron Butler or maybe Rasual Butler. We’re talking about getting Jimmy Butler.

Whatever. We should keep it in the family.

Back to the real world, Jimmy Butler is a short term rental. There is no guarantee we have him more than this year. Not worth the risk.

He’s no Kawaii Leonard, not close.

If we can get Jimmy Butler by unloading heavy contracts like Whiteside or Tyler Johnson; or toss non Heat culture players into the deal like Dion Waiters, all good, do it. But the idea of giving away young talent like J Rich, Justice Winslow who’s going to break out this year or Bam Adebayo is a non starter.

Bro, Mr. Belvedere is available? The Heat should trade for him! That guy’s a fucking superstar.