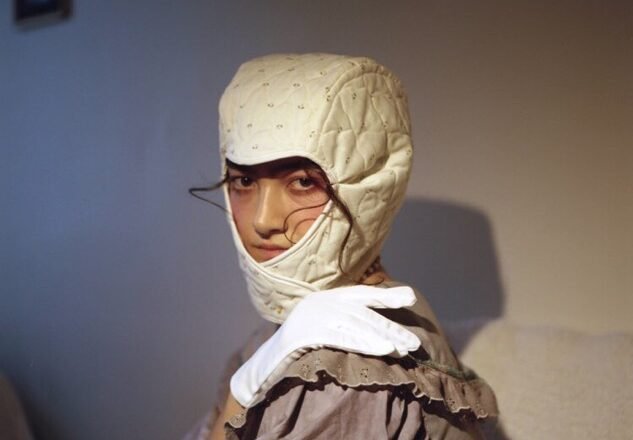 For Sienna Takabe, sculpture is wearable. I was first introduced to her work by the director of Central Fine gallery and was very much pleased. Through her architectural gestures; she joins the handful of ultra contemporary artists making waves today such as Emma Stern, Vickie Vainonpaa, and Olive Allen.

I recently sat down with the 23 year old Miami based artist; where we were joined by Baths, the curator of Piero Atchugarry gallery. Takabe informed us of artists like herself and Iris van Herpen who are pushing boundaries in art and fashion.

I hear a lot about California’s effect on Hockney paintings, what effect do you feel Miami is having on your practice?

Sienna Takabe: When I originally decided to move here from the West Coast I chose Miami because it’s something very different from the moody grunge of Seattle. I was anticipating flashy, dreamy gaudiness. A place where I could design more freely and wear my own pieces in crowds that would understand them. While I have found the noise of Miami to be comfortable and what I had hoped, I was surprised to find a community of serious and prominent artists. I’ve discovered a world where people make one of a kind, handmade, irreplaceable objects of adornment and entertainment.

Since living here, the way I think about designing has begun to shift away from practicality, not only its wearability but also its replication. Rather than watering down my aesthetic to be consumable I’m pushing for it to become something that is observed and using the human body as a base for sculpture and textile design. 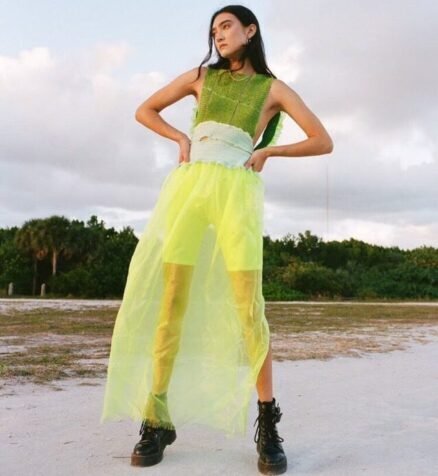 Your installation at The Sagamore Hotel, curated by Carolina Toncovich, caused a bit of a stir.  What were you thinking about going into that exhibition?

My work takes inspiration from gothic lolita, Harajuku fashion and the works of Rei Kawakubo and Yohji Yamamoto. I spent some time in Tokyo as a model where I worked closely with local fashion students. I became increasingly more interested in the creative side of the industry and began creating my own character through styling and photoshoots. Upon returning to the U.S. I learned how to sew and started cannibalizing materials around my house for fabric like curtains, blankets and dresses.

With the aesthetics I picked up from Tokyo and my experiences in the world as a femme presenting girl, I’m interested in taking the unapologetic sweetness of lolita fashion and contextualizing it in the world where evil exists.

For my piece at the Sagamore I wanted to use recognizable parts of garments that are associated with beauty and sexuality and then create something awkward. It features a disassembled corset, straps from lingerie, and sheers and silks from sleep wear. They all come together as a grim, freakshow-esque restrictive bodice and 10 ft long sleeves. The garments that are intended to show more skin are instead stacked and collaged together to create an entirely immobilizing garment. It portrays a girl who had sex appeal shoved down her throat then turned around and said “This is what you wanted?” 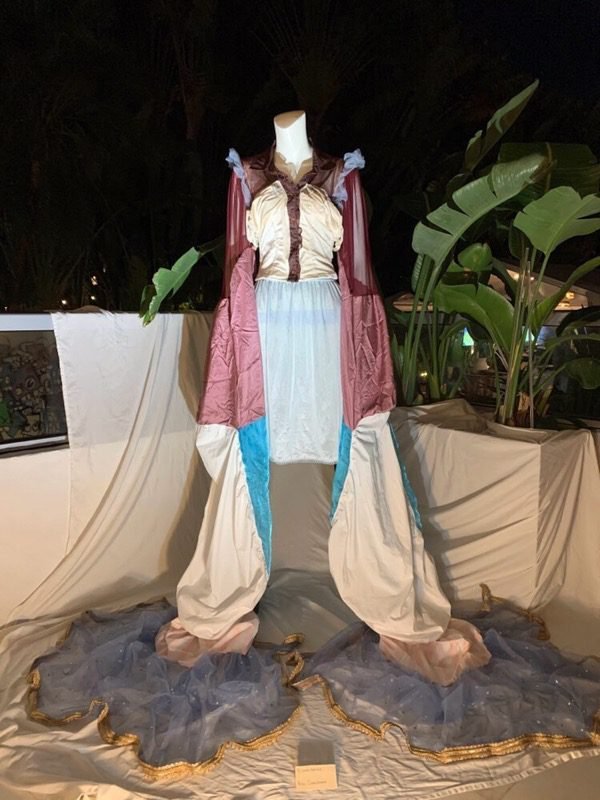 So how did you go from sewing found materials to thinking sculpturally?

I first started thinking more in terms of unconventional clothing and filling up space with structure when my artist friends asked me to design their performance costumes. I had complete creative freedom, I would listen to their music and mostly intuitively sew without making patterns. The point being that the piece was visually engaging and a spectacle for the audience.

Rather than building off of a base structure, I often start from the shoulders or neck then build down piece by piece to make a final form. Since I am not formally trained in garment construction, my process is innately unique to how I understand textile manipulation and how clothing can adorn the body.

I think recently I’ve especially stepped away from ready to wear and focused more time into using my fabrication voice for art. My recent collection uses unconventional materials like vinyl and weapons embedded into otherwise delicate pieces. Which obviously are useless in an everyday wardrobe, so I had to ask myself “what am I making this for?” And I’ve come to understand that while I do design popular ready to wear, there is also an ultimate, ultra me who creates art for the spectacle. While technically this would be my couture line, I am very inspired by my visits to the MET fashion exhibits and think that there is something so powerful in seeing art that I could literally place myself in. To think, who would I be on a day that I wear that piece?

John Barrymore is a conceptual artist based in Miami Florida. He also writes for Mat Gleason's Coagula Art Journal.

View all posts by John Barrymore →