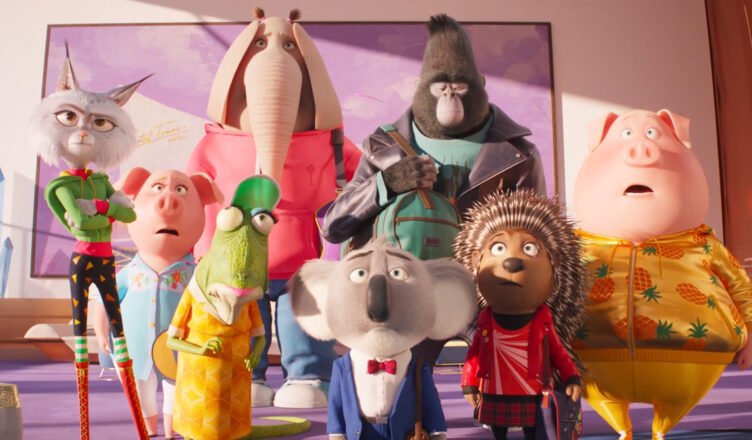 There’s a long history of songs being passed down from generation to generation. So why does it irk me so much to hear all these songs from the 20th century being repeated ad nauseum?

For example “Don’t You Want Me?” by Human League might be a great song, but there’s no reason two different radio stations in Miami in 2021 should be playing that song from 1982 at the same exact time. There’s so much amazing music out there, but we as a society have decided to only broadcast a few dozen different songs.

The new animated sequel  Sing 2, leans hard into that idea there are only a couple songs worth hearing. These tunes are changed up to be suitable to be sung by cartoon animals. And so around the framework of a let’s-put-on-a-show-plot we are able to watch animals do a G rated version of Prince’s “Let’s Go Crazy”,  mope around to Elton John’s “Goodbye Yellow Brick Road,” and make a big showstopper out of U2’s, “I Still Haven’t Found What I’m Looking For”. There’s a couple slightly more obscure songs by The Yeah Yeah Yeahs, Mercury Rev, and Bomba Estereo, but for the most part Sing 2 perpetuates the idea on a new generation that we should only listen to the same tracks over and over and over again.

For that reason Sing 2 even if it is slightly forgettable, makes an interesting bookend for the jukebox event of 2021, The Beatles “supposed” documentary Get Back (I air quote “supposed” because the conspiracy theorist in me can’t quite believe all this footage of the most famous band in the world was lost for over half a century and was only unearthed immediately after deepfake video and audio technology was perfected).

Just like in Sing 2, Get Back has us listening to songs we’ve heard an infinite number of times. Except instead of tweaking long finished songs to fit coming out of a cartoon Koala Bear’s mouth, Get Back demonstrates how the songs were created by the live action Beatles. You would think after the eighteenth time of hearing “I’ve Got a Feeling” in this marathon documentary, I would never want to hear that song again. But oddly enough I played a Beatles album immediately after finishing Get Back. I guess the gatekeepers of entertainment know what we want after all. We want the songs on our culture’s playlist to remain the same.