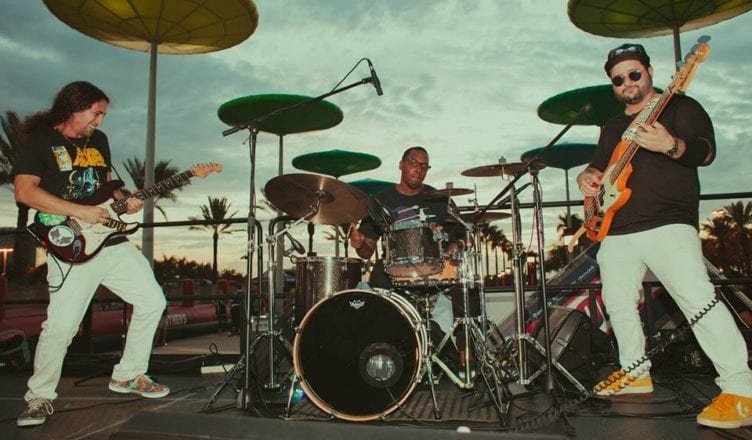 “ Pow!” was originally the first line of “Slide (2 the Left”). In terms of writing, I literally wanted to hit my listener in the face. Before it became a dance song, it was originally going to be a pseudo-aggressive rap song—something more hard hitting but inoffensive. Nothing was coming to me, I had serious writers block. It took a couple months before the song just spilled out of me. Like Stan Lee or Mike Judge, two writers that work through their own characters from multiple universes, it inspired me to create a song out of my own lyrical multi-verses. I channeled the characters from our 2018 album, Chocolate Decadence.

The characters from my old songs couldn’t drive the story behind this new song, though. The eminent “Pow!” was in the driver’s seat. If Captain Kirk manned the Enterprise, interjections were the conductor driving this song. Because I was so focused on the impact of words that reflect sound, creating a narrative for this song was like writing a comic book with strips and frames that came pre-prepped with thought bubbles.

“Our intergalactic dance craze is all the buzz.
… cause we’re blowing up.”

My characters for “Slide (2 the Left)” hailed from the multi-verses of Disco Zombies and Mothership, for this futuristic funk track. It had to make all the intergalactic Disco-nauts dance. It walked them through the steps of 2084. “Slide 2 the left/ Two-step with your right/ put your hands on your head…” Not only are these actual dance steps that I imagined for this song, it is Slide (2 the Left)’s Easter-eggs from one of my favorite cult classics.

When we started production for the recording of “Slide (2 the left),”  we wanted to fill the sound-space out in the song. Miami’s own DJ Oski Gonzalez brought out his Congas, which was cut down to one conga. The one felt right—the vibe felt good. The sound was full-enough—it didn’t take away from what we do as Xotic Yeyo: the trio. More than anything Oski’s playing really pushed the percussive feel of the song. We cut our original arrangement from five minutes to three minutes for radio-sake, practicing at Cody’s Home-studio. It wasn’t long before DJ Oski suggested an idea for our track; we should open with the vocals over the kick-drum. We jammed it out and it sounded wild! Sometimes an audience isn’t listening for the music…but the silence. On top of assisting us as a musician in our recording, he connected us with local super-star DJ Le Spam.

DJ Le Spam of the Spam Allstars has a museum of a studio in Miami called City of Progress, where we recorded and mixed down the “Slide (2 the Left)”. His City of Progress is a palace with the most surreal record collection I have ever seen. He has put tons of local great names to tape at this studio including Fusik, Electric Kif, The Beholders, and many others.

We must’ve listened to Slide played 7 or 9 different ways. It’s mind-boggling how different each recorded take could feel, even though it’s the same song. We listened to all the run-throughs and all the tracks, over some of the best high-powered Cuban coffee ever; it is Le Spam’s special recipe. Le Spam then heard something in our intro that we didn’t.

“Have you thought about running the intro-vocals through a vocoder?”

Le Spam, pulled out the Vocoder pedal, and tweaked the Moog tone. He connected the instrument to the pedal, and into the pre-amps. We played the melodic lead-line behind the recorded vocal track, and it sounded like something Daft Punk thunk. We kept it as the intro of our song. It was unreal, and unplanned, and really gives the song a futuristic kick in the opening, inviting the “Pow!”

After the mix-down was finalized at City of Progress, we sent the mix to get mastered by Winter Park’s very own Ely Oyola. Thank you to all you guys do behind the scenes. We are super happy with the results. Please continue to support live local music, and if you haven’t already, check out Xotic Yeyo and our song “Slide (2 the Left)”.