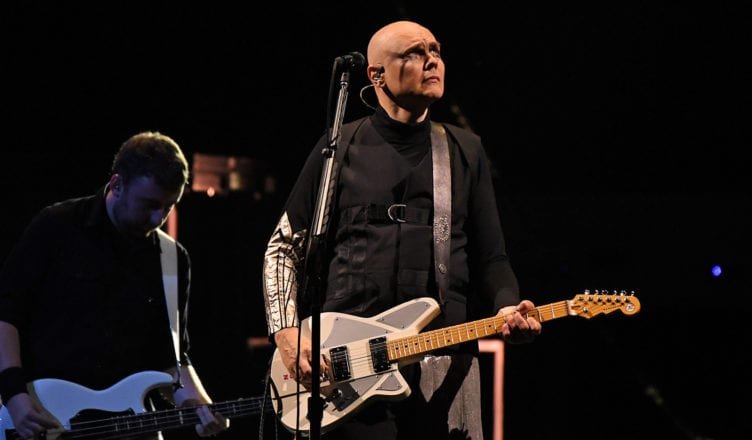 The Smashing Pumpkins did not belong in the Arena, maybe Revolution,  but from the vibes more likely Bayside for free at sunset.

One of the worst Miami concerts ever. Or at least up there.

Little harsh but not if you consider the price of admission. Our floor seats were $160 at face value and sure they played for three hours but again, not worth the price of admission. The vibes, songs, performance and visuals all felt dated in irrelevant nostalgia without cause. Obvious curtain call for fading rock stars wanting a final paycheck to set themselves up for life. Which to their credit they duped Miami out of a night.

At one point guitarist James Iha greeted the crowd with:

“Thank you, Miami. Thanks for rocking out. It’s humid down here. Yeah. You have alligators…and geckos…right?”

But this was the Billy Corgan show.

Our colleague in the Miami New Times, David Rolland, noted, “It seemed a little odd, but if you weren’t comfortable with staring at Corgan’s face on a giant screen, this was not the show for you. There were tarot card drawings of him, clips of him from the band’s old MTV videos, and more recently made videos featuring his distinctive bald noggin.”

Billy Corgan looked like an emo mini-me grown up.

Miami filmmaker Billy Corben with a guitar would have played better.

Worse production than a Mardi Gras parade at the Mardi Gras Casino. No pyrogenics. No elaborate stage or set design. At one point they wheeled out this weird pagan alter thing and pushed it around the arena.

The graphics and visuals were stuck in 1992.

Corgan’s skeleton costume resurfaced like a bad sequel to Coco on meth in the multiverse.

They covered Led Zepplen but it was a stairway to nowhere.

Or a stairway to needles..

Smashing Nihilism. Corgan ate and ate his own ego, so full of himself until he disappeared into irrelevance.

If the price of admission wasn’t so high, our moods wouldn’t have been so dark. But this show was not the fault of a Miami audience.

This one was on the band.