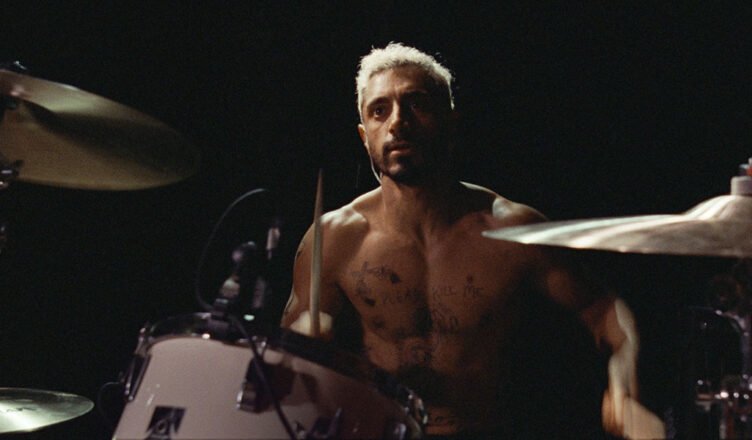 Sound of Metal is a new movie about a drummer. I was asked to preview it. Why? Because I’m a drummer, of course.

The opening scene is a concert clip which features a red-headed singer with juicy lipstick, a black see-through dress and combat boots who is joined on-stage by a shirtless drummer with  “please kill me”  tattooed on his chest. The singer wears a dog collar and yells loudly into the mic.  We get it — punk rock. It reminded me of the super-obscure band, Teddy and the Frat Girls. Even if it was probably accidental, it was a nice touch.

After the next gig, the drummer, played to perfection by Riz Ahmed, begins to totally lose his sense of hearing. I immediately empathize. A drummer who all of a sudden can’t hear? Game, set, match. The dream is dead, muerto mi amigo. What next for our punk drummer?

What follows is the standard sequence of denial, anger, temporary acceptance and finally, meaning of life enlightenment. It moves along slowly. Oh so slowly. The director, Darius Marder, doesn’t move on till we get it. Or at least he thinks we do. The section is important, so it’s not fair to say it drags. It’s all about learning how to function as a deaf person, which most people never think about too much. But it definitely could have benefited from some better screenwriting. To the movie’s credit, the acting is dead-on realistic and the cinematography top-notch.

Our drummer eventually bonds with the community that takes him in and teaches him how to function without his hearing. But his dream to be a punk drummer hasn’t completely died yet. He travels to France to reunite with his girlfriend/singer of four years, played flawlessly by Olivia Cooke. Alas, the rebellious, punk singer the drummer once knew and loved, is no longer. Although she doesn’t immediately succumb to the realization she’s moved on, eventually it becomes obvious to the both of them.

The movie, which opens at theaters today and streams on Amazon Prime next month, deals well with a lot of deep, yet standard, themes. The music/deaf angle makes for an interesting wrinkle. If you are cerebral and mellow, you will enjoy a very well-made film. If you seek punk rock madness, Sound of Metal will scrape your nerves almost as much as Teddy and the Frat Girls is likely to http://www.tbcredit.ru/zaymyi.html.