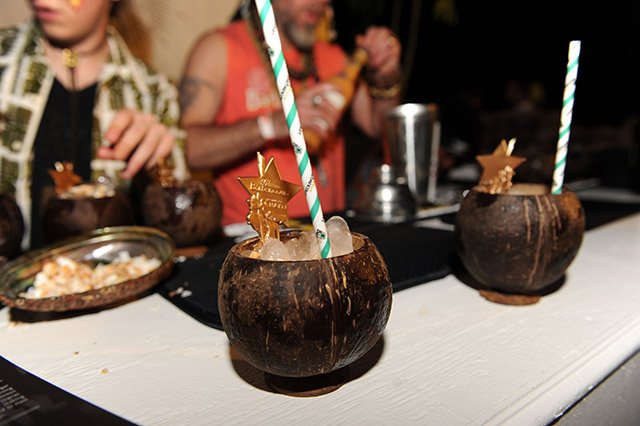 Let’s be frank. The idea of hitting up happy hours as a regular habit can seem too “middle class” for some. Many won’t admit this to be true, but test out the theory on some friends who are casual drinkers and see for yourself. I’m here to tell you that’s a garbage way of thinking, and if you want to survive South Beach as a cheapskate, or even just a smart spender, you gotta get over yourself when it comes to happy hour. Don’t just be cool with it, but rather EMBRACE it. Everyone in South Beach does, even the millionaires. South Beach happy hours are legendary, mostly because they pre-date a lot of the residents who live here, but also because they are a source of some sort of feeling of equity.

You’re not too good for happy hour, so stop telling yourself you are and do what literally every South Beach local does

The best happy hour in South Beach is, by far, the gigantic domestic draft beer pitcher at Lost Weekend, which comes in at a mind-blowing $8. It serves about 5 pints of beer, and it costs what one pint would pretty much anywhere on the beach, and in much of Brickell or Wynwood.

If beer’s not your thing, hit up Santorini in the South of Fifth neighborhood at the Bentley Beach Club. They have $5 cocktails and wine, a pretty great Greek summer vibe, and an outdoor area with a nice patio, pool, and sunbeds. Oh, and they also have a happy hour small bite food menu. Imagine grabbing 4 well-made cocktails in your bathing suit, late afternoon, with some moderately harmless Euro house music in the background, feet in the pool, eating souvlaki. Now imagine walking away with a $35 bill for said experience. You’re welcome.

Haters will tell you paying $5-$7 for a slice of pizza is criminal. They’re not wrong, if we’re talking about the standard, horseshit pie that 85% of America confuses for decent pizza. They ARE wrong, however, when it comes to South Beach’s obnoxiously large jumbo slices of pizza. The king of all jumbo slices in South Beach, bar none, is Primo’s Pizza in the South of Fifth section of the city. It may not be true New York pizza, but honestly what is, outside of New York? What Primo’s offers is a $5-6 slice of pizza the size of your head that can easily fill one person up, even after booze. They’re open ‘til 5AM on weekends, and are a stone’s throw from a bunch of bars. You do the math there.

The novelty-sized pizza slice is a great way for fellow cheapskates to both mop up their cheap happy hour drinks, and get some carbs in for walking around the beach, day or night. You can get two slices and two beer for like $22-$25 bucks, all while sitting a matter of blocks from the city’s swankiest restaurants, clubs, and beach hotels. Primo’s isn’t the only jumbo slice shop, either. In fact, there are probably 5-10 more just in the entertainment district alone. No one charges more than $8 per slice, and all slices are as big as about 3 normal ones you’d get in a standard pie.

Man (Woman) can not live on pizza alone…

This is why navigating healthy eats as a South Beach cheapskate is also tremendously important. Lucky for you, there are some great options. The hole-in-the-wall eatery “My Ceviche” is one of the most underrated spots for fresh food in all of South Beach. It was formerly a small kitchen in a hostel, but the hostel is now closed permanently. My Ceviche, however, continues to rock with some heavy eat-in and takeout business despite not actually having a dining room. There are a few tables setup out on the sidewalk for guests, but the move here is grab it to go. What should you grab to go? Well, a lot more than ceviche.

This spot has fresh salads, poke bowls, burritos, and hand cut lime seasoned chips and popcorn. You can substitute rice for cauliflower rice, get wheat tortillas for some fiber, and eat fresh fish, shrimp, and chicken with a Caribbean AND Mediterranean vibe to the seasonings. Oh, and burritos and salads cost like $12, with actual ceviche running for a bit more than half of that. The move here, South Beach cheapskates, is to dine improvised al fresco. You grab some to-go goodness, walk the 3 blocks down to South Pointe Park, hit a bench on the bay walk or blanket in the grass, and you have a picnic. Grab a bottle of wine at the closest bodega (Playa Market in this case) or a few beers, and make it an evening. Just don’t be a dick, and throw your trash out when you’re finished. Not being a dick is free, btw. WIN/WIN for the cheapskates.

There are plenty of other cheap healthy places to grab and go all over the beach, just not in the entertainment district. If you’re not South of Fifth, check out Rice Mediterranean on Alton Rd. for some great pita wraps, salads, and (duh) rice plates. You can also grab incredible juices and shakes at Joe and the Juice, which has a number of locations around town, INCLUDING in the entertainment district. Of course, you may not find these options “cheap” when compared to what you can do at home with fruits and veggies. The dollar cost average of fueling up on this rather than lunch at Planta is insane, though. Even at $9 per juice, if you load up on 3 in one afternoon, you’ve just spent what you would on a small appetizer at any popular healthy South Beach hangout. Thank me later.

Andy Jackson is a writer and freelance journalist based in Miami Beach, Florida. He's spent 12 of the past 15 years living and working in Italy, Argentina, and Panama, with a background in travel writing, digital marketing, and consulting. He is a graduate of the School of Journalism and Media Innovation at Northeastern University.

View all posts by Andy Jackson →