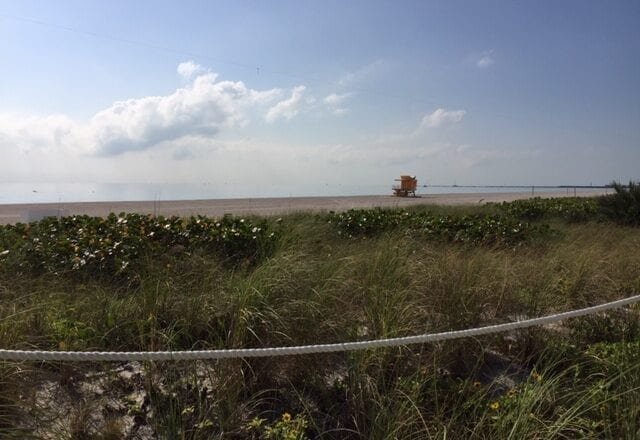 The sky was too blue. After being in our apartment for five straight days I figured I better get outside before martial law gave me no choice. The way the world’s been changing, any day could be my last to give my regards to the Atlantic Ocean.

With a paper towel to handle  the doorknobs of common areas I braved the outside world. I kept my distance from the other pedestrians. If I saw a dog walker coming my way, I stepped on the street. For once there were no cars you had to worry about running a stop sign.

All the stores were closed. Armani Exchange. H&M. Adidas. They all had signs on their windows. Some said they closed out of concern for their customers. Others blamed the government. They all encouraged you to shop on-line.

Ocean Drive was the most jarring. They really did shut it all down. All the Spring Breakers who were running amok when I was last out had been shipped back home. The volleyball nets had been taken down. The monkey bars used to harden the bodies of a thousand fitness models were all taped off. Worst was the entrance to the sands. Our beloved beach closed to any human contact.

A little stretch of the boardwalk was kept open. There were a couple artificial hills that still gave you the opportunity to stare at the beach. The tides beating down on the coast were as beautiful as ever. More so, without any human stain. Maybe there would be one positive aspect to the quarantine, it would give our beaches time to heal.

But that same courtesy wasn’t being extended to the ocean. Halfway to the horizon were five cruise ships docked close enough to foul up our waters. They were inches past the three mile line where they’re allowed to dump their sewage. I read later these zombie boats were filled with infected crew members. No port in any country will let them in leaving workers haunting our waters.

There were other ghosts on South Beach. Walking along  you’d hear the occasional phantom cough. A careful look and behind the hedges is a person, one of our homeless with nowhere else to go with the beaches, parks, and libraries all cordoned off.

But this was no time to get too down.  We have our health and we live in paradise. And for now at least we are free to go outside.