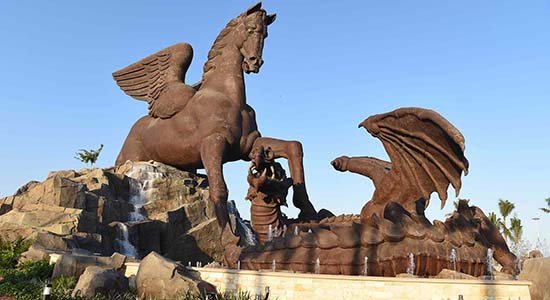 When I drive north on the Turnpike and I find myself both awed and disgusted by the massive guitar shaped hotel being constructed at the Hard Rock Casino, I have to remind myself that the Eiffel Tower was once considered controversial among Parisians. Perhaps one day when this behemoth is complete, it will join the Eiffel Tower as one of the wonders of the world. But we can prepare ourselves to formulate such an opinion on this Guitar-zilla as its construction sits unobstructed in plain sight.

I was not granted such time to come up with an opinion on another local monstrous casino construction, Pegasus and Dragon. It seemed to have come out of nowhere when it was unleashed back in 2016.

Somehow I missed the endeavor to build Pegasus and Dragon. Even though I played poker at Gulfstream Park from time to time , I always came from the south. One day I was driving by Hallandale Boulevard and was stunned and shocked to see  that to the north of the racetrack was a sculpture to end all sculptures. It depicted a winged horse stomping at a dragon. It is beyond huge, but as big as I reckoned it to be, a little research proved it to be even bigger.

It’s the second freaking biggest statue in the United States. At 100 feet tall, only the Statue of Liberty is bigger. Only the Pegasus and Dragon doesn’t carry an aspirational poem along the lines of…

Give me your tired, your poor, Your huddled masses yearning to bet on the ponies, The wretched refuse of your teeming shore seeking a winning slot machine. Send these, the degenerates, tempest-tossed to me, I lift my player’s card beside the golden door!

Maybe that’s what will give Florida’s giant new monuments of gambling some much deserved respect.