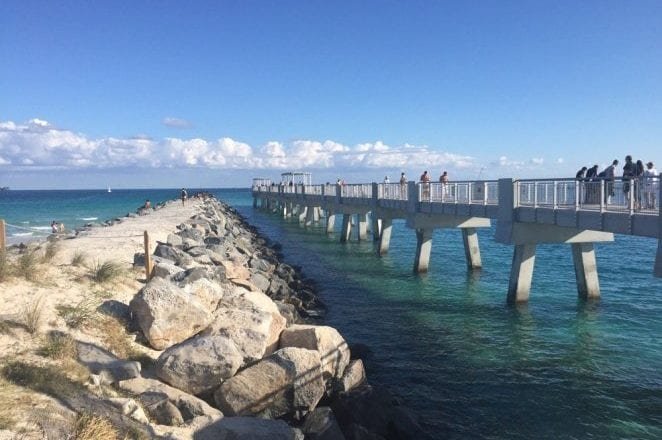 We used to jump off the pier at the south point of Miami Beach. Some would do flips or dive head first, I was only ever brave enough to jump. It wasn’t life threateningly high, though someone once told me their stepdad spent his adult life in a wheelchair because of a tragic leap off it, but it was a rush that lasted as you sunk ten feet below the surface of the Atlantic Ocean and stayed with you like the salt on your skin until you washed it off.

Everyone used to do it. It was such a Miami thing that the Perez Art Museum Miami had a piece of video art titled Government Cut Freestyle, 1998, looping a group of pier jumpers taking the leap over and over again.  The art piece didn’t last long enough to show the difficult climb back up the rocks to the surface world.

The pier was closed off to the public and under renovation forever. Then it reopened in 2014, child proof with clear signs that there was no jumping or diving allowed.

I walk or jog down the pier maybe once or twice a week now . From its elevated vantage point I’ve seen parrotfish swim by the jetty. I’ve witnessed a cat catch a crab from the rocks. I even saw a group of shaved head monks wearing saffron colored robes like they were a quartet of Dalai Lamas. But not once since the South Pointe pier’s reopening have I seen a daredevil rebel against the posted signs and take the plunge into the water.