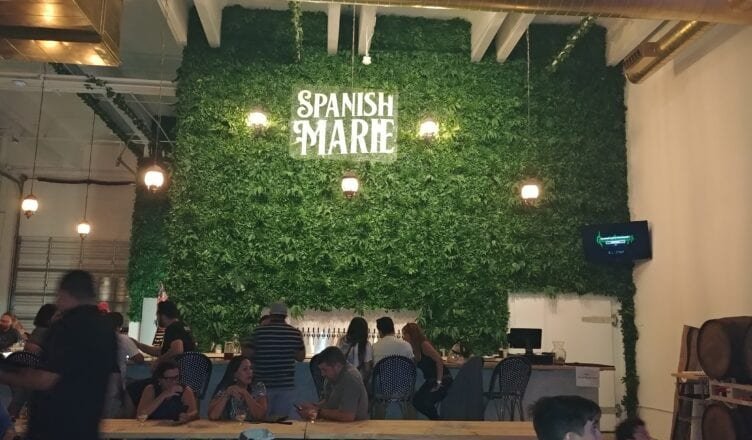 You know Kendall: cookie-cutter houses, crappy nightlife, and more Walmart’s and Ross’s than trees, but something’s changing all that. Homegrown businesses like Kendall’s first craft brewery: Spanish Marie. Now there’s actually a reason to stay in the suburbs instead of driving to a crammed Wynwood.

I first ventured to this brewery about a year ago to hear blues on Mondays and jazz on Wednesdays. I became acquainted with two bands: LoneWolf OMB and The Mojo Hands. The blues was smooth while I sipped melon ales or watermelon goses in their tiny, speakeasy-themed warehouse: other times I’d try their creative collaborations such as when they teamed with Knaus Berry Farm to concoct a stout made with their well-known cinnamon rolls.

About a month ago, Spanish Marie morphed into a beer garden: they changed their location and moved into a grander space. Right away, I noticed the difference: the thin, plastic chairs have been replaced by thick, wooden benches; the bartop is long and consumes almost the entire back room; the ceiling is high with a gold, exposed pipe stretching across it; and there are potted palm trees and plants giving life to the industrial style with vines twisting on the walls. But most noticeably, there is a mauve food truck parked in the back corner of the warehouse!

It wasn’t just aesthetics and no substance. The food was delicious. The staff from the Purple People Eatery brought me a bison burger with goat cheese, arugula, truffle oil, and a fried quail egg. Yeah: it was as good as it sounds. And speaking of sound, for those who knew the old taproom, there is a huge difference in terms of ambiance. Although I preferred the intimate vibe of the former, the new place has a party atmosphere that works as a venue for local bands. I discovered the prior location is still available, but only for private parties and to house their seven-barrel brew system.

The band at Spanish Marie was awesome that night.

A drummer, guitarist, and bassist with all their equipment wouldn’t have fit comfortably in the original place. When I first walked past the doors, Four Street were jamming to The Doors. The whole evening, they played classic rock hits while lead singer, Carlos Alfonso, belted tunes like an old pro with his powerful voice. They are young, but talented. Guitar solos easily ensued from Alfonso’s hands. Some of the songs from their three sets were: “Purple Haze,” “I Want To Hold Your Hand,” and “L.A. Woman.” Alfonso even looked like Morrison as he sang, “Mr. Mo Jo Risin’.” But the highlight was when they performed, “Have You Ever Seen the Rain,” my favorite song from Creedence Clearwater Revival.

With the craft brewery scene exploding and expanding in Miami, Spanish Marie is another gem in the Magic City, and from what I hear from the brewmasters, they view it all as collaboration rather than competition: as they are not like the beer corporations that try to ban local craft beer from being sold in Florida supermarkets such as Publix. But like Marie Waite, the anti-prohibition woman that inspired their name, Spanish Marie is bottling their own beer and selling growlers. In the spirit of the rumrunner of 1920s South Florida, the beer prevails. If Waite could come back to life and see the efforts of this local speakeasy, I think she would be proud of the place that bears her name, and I think she’d drink a stout or two.

Veronica Suarez is a poet, writer, editor, and a graduate of the creative writing program at F.I.U. Her most recent book, Nights in The City Beautiful, is a novella in verse in search of a publisher.