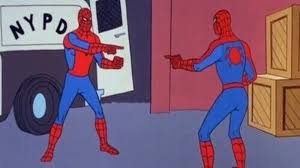 I’m a bona fide comic book nerd, the type who got weepy eyed when Stan Lee passed away last month, but even I have to admit comic book movies have gotten to be a bit too much. When you need a scorecard (or at least a copy of an Official Marvel Handbook) to know what’s going on in the latest Avengers movie, something has gone awry.

It’s a problem that printed comic books have been dealing with for a while. When you go to a comic book store nowadays you’re more likely to see a 40 year old customer than an 8 year old one. Part of that is the insane price of comics, but it’s also because their universes have become so large and convoluted there’s no jumping on point for new readers.

Comic book movies have reached a similar crossroads where you need to have seen the 20 previous Marvel movies to get what’s going on in the newest edition. That is great for someone like me who has studied all the backstory, but what about the kid who doesn’t know Hawkeye from Hawkman?

Fortunately those kids now have Spider-Man: Into the Spider-Verse. It is the first comic book movie made in a while with the kids in mind. First off, it’s a cartoon (one that is uniquely animated). Secondly, despite the overly wordy title and a plot that is impossible to explain, it tells a fun self-contained story that is not bogged down in continuity. You can go to this flick without ever hearing of Spider-man and still enjoy yourself.

In this animated movie there’s an infinite number of alternate dimensions, each one having a different Spider-man. In one world Spider-man is a blonde teenage girl, in another he’s a pig, and in another he’s a noir figure spouting Raymond Chandler-esque dialogue. In this movie they all get together to help fight The Kingpin and his minions.

Having all these Spider-characters of different shapes, sizes and ethnicties was a clever way to get around a common complaint. Nerds have been getting uptight that comic book and Star Wars movies have been casting more women and minorities in pivotal roles. But it makes the Hispanic kid excited to see a Spider-man with the name of Miles Morales, just as it made my daughter want to read a Spider-Man comic after seeing a female Spider-man swinging around that looked like her.

The movie goes out of its way not to tell the same old story of your or your father’s Spider-man. Think of it as your kid’s Spider-man. And if you don’t like the idea of that you can always rewatch the Sam Raimi/Tobey Maguire Spider-man movies or better yet, pull out those Stan Lee written comics.