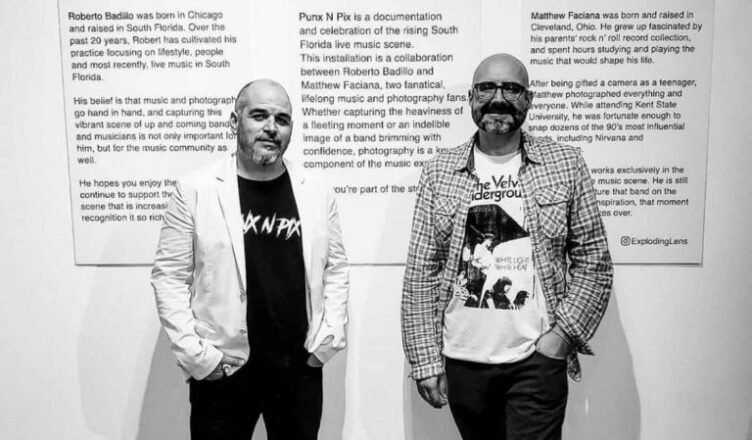 Rewind to 2017, pre-pandemic, when South Florida’s local music scene reverberated from Miami to Port St. Lucie, and venues up and down the coast hosted shows nearly nightly. “In that year there was/ an intense visitation/ of energy,” to borrow a piece of Jim Morrison’s epic poem, “The Anatomy of a Rock,” and here near the shore (“I left school & went down/ to the beach to live”) the “electric wildness” Morrison once detected was present again, shared by fans and bands alike. For the first time in a while, South Florida seemed to be cultivating a steady local music scene — and two photographers took notice. Then strangers, long-time music lovers Robert Badillo (SpinStyle) and Matt Faciana (ExplodingLens) noticed the budding revival and dove in.

Paging through concert photos in Rolling Stone, Creem and Circus had given Badillo an appreciation for live-action photography. “Seeing the great shots seeps into your DNA,” he says. Making a living still took precedence, but an invitation from a friend to photograph bands at Propaganda in Lake Worth put him on the path to documenting the local scene. Badillo shot All The V Words, Beat Obsolete, and Some Kind of Nightmare, and music photography quickly became his second profession.

Badillo hopes to work in this space full-time providing bands with content to help them prosper — a goal he’s partially achieved. This year he has teamed up with South Florida’s We’re Wolves for a shoot featured in Outburn magazine, and toured with Fort Lauderdale’s Modern Mimes to produce a mini documentary and dozens of electric images. Recognizable by their organic, raw style and emotional candor, Badillo’s snaps can be found and viewed all across South Florida. Badillo, ever the music fan, encourages people to not stop there. “Look at the picture, but stop and check out the band,” he says. “Most of the bands are really talented. It’s all about the music.”

Faciana was photographing bands in the 1980s during that decade’s rock/punk explosion. Raised on iconic magazines including Rolling Stone and Maximum Rocknroll, Faciana also photographed touring bands before they ended up on the radio. He captured the legendary Nirvana on their last club tour before stardom and everything else.

But he set aside his dark nights in dive bars for a day job. More recently, he began turning up at Beer Punx in Fort Lauderdale with a camera. After a few shows in the small venue filled to the edges with fervent fans, Faciana’s fuse for band photography was re-lit. As with Badillo, Faciana’s passion for music and photography go hand in hand. “I want to capture a moment, it could be a fleeting moment, where the artist is surprised by the photo. I want to capture an artist lost in the music, in a raw, vulnerable state, but still in a beautiful photograph,” Faciana tells PureHoney.

That elusive mix spontaneity and composition is the through line in a portfolio of striking images of bands including The Haunt, Hellfire Hooch and Palomino Blond.

Somewhere, most likely in a bar along the coast, Badillo and Faciana crossed paths and bonded over melodies. (Some of their shared favorite bands in common are No Coffin, Solar Reef and The Boas.) Eventually, the two hatched a plan to celebrate the maturing local music scene. Punx N Pix was the result, a collaborative gallery exhibit featuring bands and photographers. Initially designed to be held once a year, Punx N Pix’s instant success encouraged the duo to host the event every six months, if not more frequently.

The pandemic placed the gatherings, and most of the music scene, on hold. Encouraged by the recent resurgence of shows and events, Badillo and Faciana look forward to bringing back more Punx N Pix’s in 2022. In the meantime, they’ll continue to capture South Florida musicians in all their glory.

Robert Badillo and Matt Faciana can be found documenting bands from Las Rosas to Poor House to Respectables. Poster collage shot at Respectable Streets 34 Year Anniversary. To book them for shows or other work, contacting them on Instagram at @spinstyle (Robert Badillo) and @explodinglens (Matt Faciana).