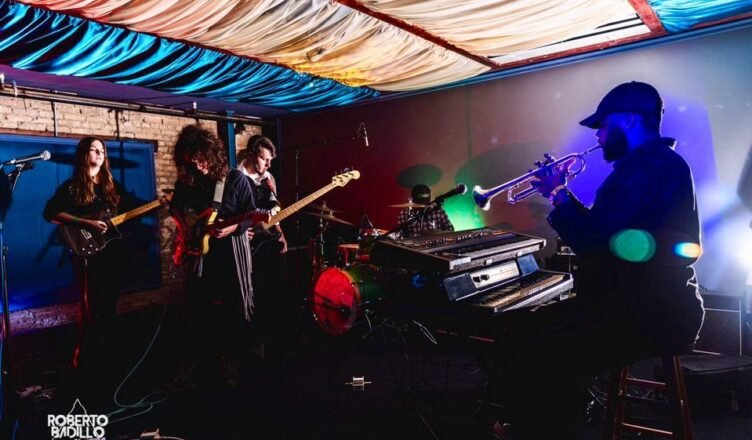 A black screen sits silent just past that point of discomfort, then the movie begins. Outside a home on a windswept valley, a young woman looks away from the camera. Her gaze is fixed on the dirt road glimpsed through dancing grasses. A nostalgic synth rises as a dust cloud forms in the distance.

Maybe it’s a car. Cue the wistful strumming of a guitar and as the dust cloud nears, the drums kick in. As sweet vocals whisper “… time to know what you mean,” the woman turns to the camera. Her smile is confident, her future is bright. We don’t know where she’ll go – if that car’s even coming to get her – but we know she’s going somewhere.

The movie, of course, does not exist (yet) but the music does. It’s called “Moments,” the title track of the newest EP by Lakeland’s Spirit and the Cosmic Heart, who are performing at Bumblefest in downtown West Palm Beach on September 17.

The band has refined an impeccable cross of jangle rock with shoegaze and saccharine pop over three EPs. “Moments” builds on 2019’s “Memories” and 2018’s “Dreams,” a progression influenced by the isolating circumstances of the last year, guitarist and vocalist Joshua Miller said.

“Covid and the distance it caused allowed us to reflect a little longer on our writing process,” Miller said. The band “scrapped some work and refocused on common threads,” he said, a step that “helped solidify our intentions.”

“Moments” is another melodious nocturne in four parts. Beyond the title track, “In Between Dream” musters danceable pep even with its ghostly, gothic air. “Voices” throttles up, like a high-speed nighttime chase in that imaginary movie. “Shadow” brings the EP to an airy, ambient close.

Miller is joined by brother Daniel Miller on bass, percussionist Ian Lopez, Dallas Smith on keyboards and trumpet, and Melody Wells on vocals and guitar. He said they’re working towards a first full-length whose songs “will likely feel familiar and tackle the realities of existence and feeling.”