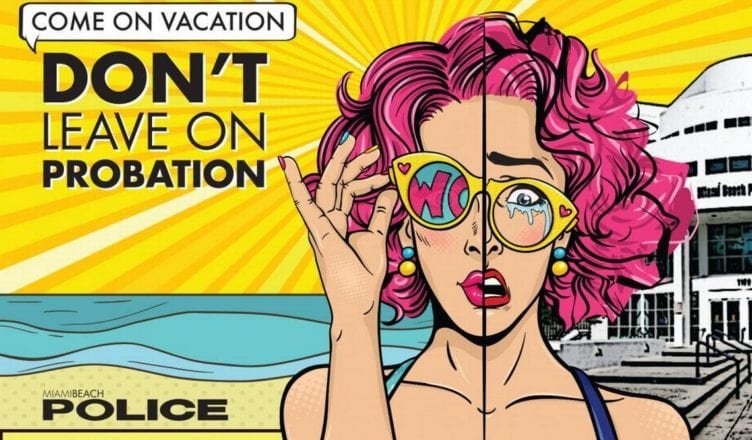 Spring Break Miami Beach. Have you heard the stories?

A girl falls out of a car on the way to the airport and gets run over. Not good vibes, obviously.  A man knocks a woman out ice cold in a street brawl on the beach. Definitely terrible vibes and an atrocious viral video. Kids drinking in cars on the MacArthur Causeway.  Uh, huh. Is that it? An injured cop. That it? Bullets fired? Anything else?

Yeah, kids are getting drunk on the sand. No way, for realz?

Spring Break is spring break and those in charge are making it worse. Miami Beach already vamped up its security the past couple of weeks; they put cameras on the sand, closed Ocean Drive to traffic and narrowed the highways to track license plates (which is making traffic fucking impossible to navigate to the beach). Now, those in charge are acting like it’s Armageddon and they have to stop the chaos with a purge.

Very recently, Miami Beach mayor Dan Gelber held an “emergency” meeting with City Commissioners to handle the “problem” of Spring Break this year due to angry residents who are yelling get-off-my-sand. Mind you, Spring Break on the sand has been pretty much squeezed into just a couple of blocks with the 800 block being Ground Zero.

The mayor’s solution? More cops and militarize them.

According to the Miami Herald, “Starting this weekend, a police squad of roughly 25 officers wearing protective gear will patrol the beach in front of Ocean Drive throughout the day to seize alcohol and drugs.”

If you watch the news and read The Miami Herald, honestly, most of the videos are framing this through a racial lens. The viral video’s feature young African-American men and women. Historically, Wet Willie’s and Fat Tuesday’s is the part of the beach where black Spring Breakers congregate. Where is Wet Willies? The 800 block of Ocean Drive.

Where are the most security and cameras? You get the point.

But let’s get back to this heinous video. The problem is this video.

This video is an outlier not an indicator. This is not normal in an way, shape or form. You are more likely to get hit in the head with a coconut than get knocked out in a scenario like this. Yes, this video is terrible. But it is also the only thing that is circulating. And if you read or listen to the commentary, the undertones reek of racism.

We went to the beach both Saturday and Sunday. Rode bicycle from Downtown on the Venetian Causeway. Made it to the sand in 25 minutes. One day on 11th street, the other on 3rd street. Both days were good vibes, and, we also rode through 8th street. Not a huge fan of crowds, admittedly, it was turned up, but it was far from out-of-control.

We will say there was a lot of litter, but not anymore than any Saturday night off of Bourbon Street in our sister city New Orleans. Ain’t no one bitchin in Nawlins.

In Miami Beach, maybe blame the mayor — he’s kind of a pussy.

You can blame the media too, they like to frame things through a racial lens. We think militarizing the cops and sending them into a part of the beach that is turned up has the potential to make things worse during the next couple of days.  Let’s hope this weekend is chill. Maybe they should spread the crowds out. But here’s the thing, Miami really truly is its own worst enemy most of the time.

No offense, Miami Beach — but stories like this can happen any night of the week in Wynwood, the Grove, or even Kendall.