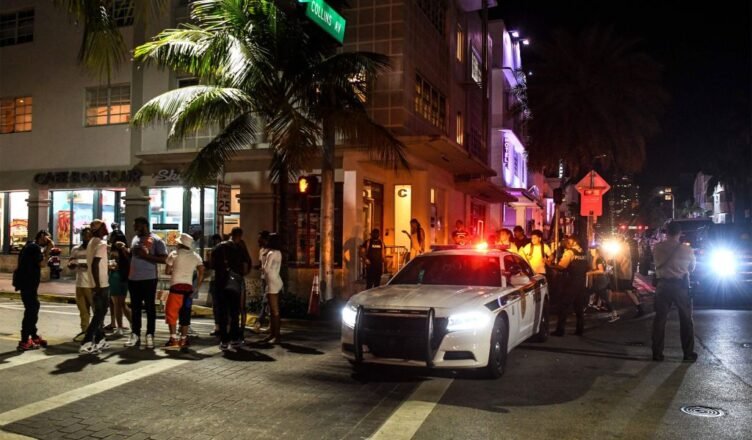 Miami Beach is in serious risk of ballooning quickly into a full blown fire starting, gun shooting riot. Like tonight. Spring break. But the city shut it down by initiating an 8pm curfew for the Beach, effective immediately, as well as blocking east bound traffic to the beach.

What will spring break on the beach do with the new 8pm curfew? We’ll see soon. Fingers crossed. More news at 11. But even more importantly, where do you think these spring breakers will go once they realize South Beach is closed?

Wynwood is very much open and could very well be on fire tonight, literally. Are they prepared? No. Could it get ugly? Yes. It’s the biggest test the tiny (once) arts district has ever faced in its “new” rendition.

Take a deep breath and let’s hope for the best.

This is what it looks like on #SouthBeach at 8:00pm, which is the time city leaders designated as the new curfew. So far, police have not intervened @wsvn #springbreak #miamibeach pic.twitter.com/7SvsoBZyl0

Cops and spring breakers are already butting heads daily, with pepper balls being used to disperse angry crowds. Fights are breaking out, restaurants like The Clevelander are closing until Spring Break ends.

To be fair, for perspective and context, this is / was happening in only a few blocks on Ocean Drive. Six blocks make not a city.

Also, it is usually really rowdy this week anyway.

But there are a few key differences this year.

Miami has a midnight curfew. There is no curfew in the rest of the state. After speaking to several Spring Breakers, many admitted they were not aware of the curfew when buying a ticket to come to Miami.

What’s been happening at midnight was a virtual army of people herded into the streets. They want to party, not go home.

We saw several young people in Wynwood last night arriving at 11pm, which is a normal time to start partying.

They were not aware of a midnight curfew either.

Furthermore, the rest of the country is closed and the word is out: Miami is wide open.

Also, we are missing our international tourists, as well as our cruise tourists, literally tens of thousands of people, so the crowd this year is a little edgier, a little more urban and dense.

Finally, tensions from 2020 between the cops and BLM protesters is at DefCon 5. This year is definitely different. It feels like all eyes are on us and that we are quickly approaching a tipping point.

Miami Beach has declared a state of emergency. They are trying to shut it down. But what exactly does that mean for Wynwood?

Around 11pm we went down to Wynwood. It was not that bad. Definitely crowded and a mask-less party, but not tense or dangerous. Just young people having a good time on Saturday night.

With Miami Beach under a 8pm curfew, Wynwood is not that bad. Definitely a huge mask less party, but kids gonna party. On bright side, most seniors & at risk are fully vaccinated; so if #springbreak is a super spreader, less will die; arguably one could argue the pandemic is over pic.twitter.com/IzuH4MHP20