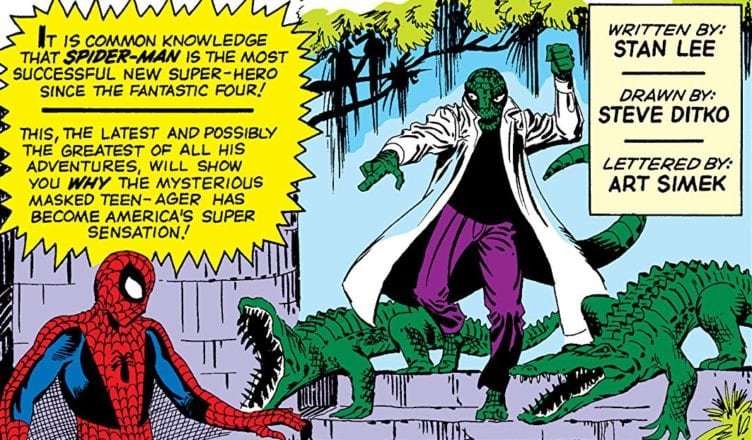 When Stan Lee died yesterday his death was felt in every corner of the world. Even here in Miami.

Most of the Marvel Comics characters Stan Lee co-created hung out in New York.  But in The Amazing Spider-Man #6  Stan Lee did give Miami its own comic book character. In November of 1963 Daily Bugle photographer Peter Parker (a.k.a Spider-Man) was sent down to South Florida to photograph  a strange lizard creature appearing in the Everglades.  Turned out The Lizard was Curt Connors,  a Coral Gables born scientist who had his arm blown off in war. Connors experimented on lizards with the theory that if they could regenerate their lost tails maybe they could help him grow back his arm.  After drinking a “cure,” Connors’ arm did grow back, but it also transformed him into a six foot tall lizard who wanted to kill all humans. After Spider-Man kicked the Lizard’s scaly behind and created an antidote to turn him back to his human identity, Spider-Man kept Curt Connors mad experiment secret so as not to embarrass Connors or his wife or son.

The Lizard is the 30th or 40th best known character Stan Lee co-created. He is obscure enough that this is probably the only one of Stan Lee’s millions of tributes bringing him up, but going over The Lizard’s origin it is shocking to be reminded of the quantity of memorable stories Stan Lee wrote. The Lizard followed the classic Stan Lee template, still there was something special about just about each one of his creations. A Stan Lee  character had fantastic powers usually given to him by a scientific  experiment gone awry, but he had an Achilles heel  preventing him from truly enjoying his powers. Iron Man had a weak heart, Daredevil was blind, Doctor Strange’s hands were mangled, Spider-Man was unlikable. But even though his heroes were flawed they always did the right thing.

There is  controversy over whether Lee always did the right thing. His artist collaborators Jack Kirby and Steve Ditko, accused Lee of bogarting the credit for their creations. Definitely much of Marvel’s appeal came from the dynamic visuals, but Lee’s trademark snappy dialogue and the existential angst he piled into his characters was irreplaceable.

His characters made every outcast reader think they were one radioactive spider bite from greatness. This comic book nerd got into comics way after Stan Lee retired from monthly comic book writing in 1970. But as a child of the ’80’s who would head to the comic book spindle at Vernon’s Drugs every chance he had, (and later beg his parents for rides to Coral Comics across from the old Bakery Center or to the still in business A&M Comics) Lee’s influence as a writer and a moralist was and still is being felt.

It is amazing to me that Stan Lee’s creations are now the most popular characters in all of pop culture. Even the most die-hard political junkie can name more Stan Lee characters than they could name senators. Walk into any church and most people sitting in a pew can name more characters from Marvel Comics than they can name figures in the Bible. It is a far cry from those days when comic book fandom was kept in the closet. There is an argument to be made on whether this is good or bad. Some might say that the culture that Stan Lee hath wrought has kept us all at an arrested development.

To that, as Stan Lee would put it, I say thee nay. Any man who would write as he did of Spider-Man and of his readers, “He was destined for greatness – as are we all!” deserves his place in the annals of posterity. Today in Miami, as we do all over the world, we shed a tear for Stan “The Man” Lee’s passing, but we appreciate that in a nearby swamp The Lizard still lurks.