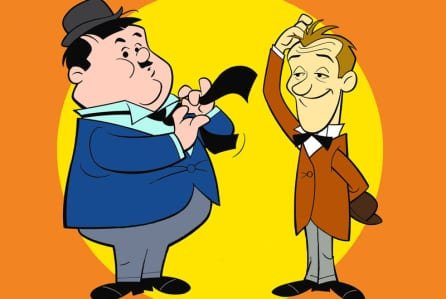 After sitting through clunkers like On the Basis of Sex  and Vice, I’d given up on the biopic as a movie genre. But Stan & Ollie renewed my faith that famous people’s biographies can make for just as fulfilling and entertaining a viewing experience as any comic book, action figure, or board game adaptation.

I didn’t know much about Stan Laurel or Oliver Hardy going into this movie. As a pop culture buff I was aware of their names and their trademarked image of the behatted thin man and his rotund partner with a Charlie Chaplin/Hitler mustache, but the closest I came to watching their comic stylings was when they were animated to guest star on a Scooby-Doo episode.  After watching Stan & Ollie though I found myself burrowing into a YouTube wormhole of old Laurel and Hardy bits. Their humor was filled with slapstick physical comedy, but not to the violent extreme of the Three Stooges.  They messed around with the English language, but not to the extent of The Marx Brothers. They were gentler and more charming. Almost like if Mr. Bean had a brother to interact with in each of his sketches.

But even if you’re not into the little kid/wholesome Dad humor of Laurel and Hardy, Stan & Ollie does what the best movies do and delves into the human condition. Instead of getting a ninety minute montage of a celebrity’s greatest hits like so many biopics are prone to do, this movie takes its time and lets you get to know the two title characters.

A majority of the movie takes place in 1953. It’s way past the pair’s heyday of being box office draws at the movies. They’re bordering on has-been status when they decide to tour the stages of Great Britain as they wait for the financing to make their first movie in years. You see them work on routines, craft jokes and drive each other mad. It’s a showbiz movie but just as much a relationship movie that anyone who has been married, grew up with siblings, or spent too much time with someone they loved can relate to. It finds the humor and the tragedy in how we always hurt the ones we love.

If you’re looking for some nits to pick, John C. Reilly’s accent as Oliver Hardy comes and goes. But he gives a performance that almost lets you forgive him for Ralph Breaks the Internet. Steve Coogan as Stan Laurel is mad dash when he needs to be and sadly poignant when the occasion calls for it, while Nina Arianda  and Shirley Henderson  add some humor to the proceedings playing the women the comedians love.

It feels like a bit of hyperbole to call this 2018’s best movie, but you’d be hard pressed to find a sweeter piece of cinema without the cheese than Stan & Ollie.