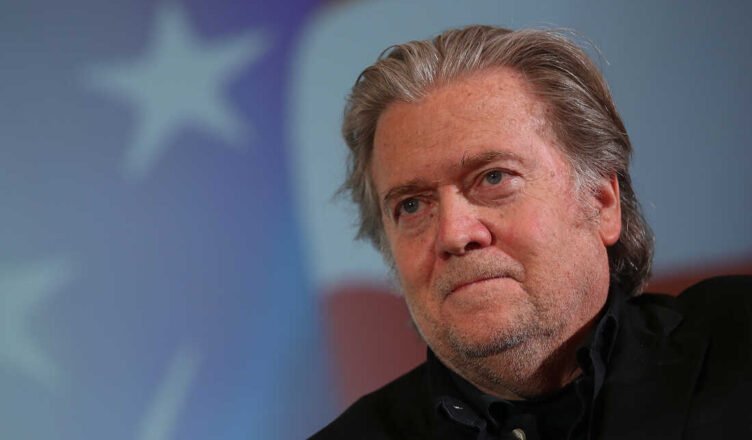 “We Build the Wall” fundraising fraudster and loser in the congressional contempt indictment game of chicken, Steve Bannon, on his 15 December 2021 War Room podcast, during a chat with Jason Miller, a former Trump campaign hack spokesperson, predicted a 100-year MAGA party reign. Say what you will about Bannon’s sartorial choices or his willingness to scam MAGA movement disciples out of their hard-earned cash, masking personal financial gains in political rhetoric, he’s no dummy.  His ‘reign’ reference is an echo from eighty-seven years in the past.  On 6 September 1934 Adolph Schicklegruber, who most of the world remembers as Adolph Hitler, claimed, “It is our wish and our will that this Reich shall last for one thousand years…”

It appears Ober Fuhrer Bannon is playing the Joseph Goebbels’ character in the Donald Trump Traveling Medicine Show. Goebbels served as Hitler’s Minister of Propaganda from 1933 to 1945.  The most recognizable Goebbels’ propaganda tactic resurrected by the MAGA crowd, “If you tell a lie big enough and keep repeating it, people will eventually come to believe it,” along with that other old chestnut, “Propaganda works best when those who are being manipulated are confident they are acting on their own free will,” helps explain our current political situation.  Like supporters of autocrats and authoritarians before him, Bannon doesn’t concern himself with the niceties of electoral politics when the outcomes disappoint.

As the January 6, Congressional hearings make increasingly clear, the insurrection at the Capitol, intended to prevent the orderly transfer of power from one duly elected president to the next, was not an organic event, fueled by disaffected voters and Black Lives Matters members masquerading as white supremacist fringe groups, but planned and encouraged by the then President of the United States and his enablers.  That list of sycophants and toadies includes the usual suspects from the far-right shadows of American politics as well as a Nosferatu-esque flatulent, a pillow clutching infomercial delusional, a similarly countenanced wife of a Supreme Court Justice and, of course, Steven Bannon.  The January 6 Capitol attacks also had their echo in the past.  Ninety-nine years prior, in November of 1923, Hitler and his cronies staged a similar event — The Beer Hall Putsch.

During World War I, Germany, and all the other combatants, experienced battlefield death on an industrial scale.  Estimates of German losses range from 1. 9 – 2.9 million war dead – representing between three and four percent of that nation’s population.   In its aftermath, surviving widows, orphans, and disabled vets totaling twice the number of those killed on the battlefield all depended on the government for support. That post-war German government, the Weimar Republic, its first constitutional government, struggled with extraordinary reparation costs owed the victors, hyperinflation, high unemployment, the demoralizing effect of a lost war and the subsequent blood feud assignment of blame.

Between 1919 and 1923, competing interests from across the German political spectrum (Communists, Militarists, Fascists) staged four separate uprisings challenging the central government.  Those factors, along with Benito Mussolini’s successful 1922 “March on Rome,” which toppled the Italian government into Fascist hands, inspired 34-year-old Adolph Hitler to lead a Nazi Party insurrection against the Bavarian regional government — planned as a precursor to challenging the national government of the Weimar Republic.

Bavaria at the time was led by a triumvirate, composed of civilian, state police and military leaders, which had its own plan to install a nationalist dictator. On 8 November 1923, the triumvirate had gathered at the Burgerbraukeller, a large Munich beer hall, to give speeches to a crowd of 3,000.  Six hundred members of Hitler’s Storm Detachment (think Oath Keepers and Proud Boys wearing lederhosen) surrounded the beer garden.  A machine gun was set up in the auditorium and Hitler with 20 supporters stormed the hall.  To capture the crowd’s attention, Hitler fired a shot into the ceiling, yelling, “The revolution has broken out.”

With the triumvirate leaders held in a separate room, Hitler returned to the auditorium and addressed the crowd, encouraging the overthrow of the central government in Berlin.  Hitler left the beer hall that night.  In his absence the leaders of the triumvirate were allowed to leave, denying the putsch putative accomplices or unwilling hostages. The following day, approximately 2,000 Nazi supporters attempted to storm the Bavarian Defense Ministry.  The uprising was repulsed, resulting in the deaths of four Bavarian State Policemen and 16 coup supporters.  Hitler was arrested two days later.  Found guilty of high treason at a trial before sympathetic judges, he received a five-year sentence, serving only eight months, during which time he dictated ‘Mein Kampf’ to his cell mates. A decade later, Hitler became the German Chancellor and Fuhrer, 19 months after that.

The January 6 Insurrection, like Hitler’s Beer Hall Putsch, failed.   The United States is not the Weimar Republic.  It’s not paying unsustainable reparations for a lost war fought on its soil.  Nor is it experiencing the hyperinflation that helped doom the Weimar Republic. The U.S. had, until the recent past, the reasonable semblance of an electoral tradition, where the candidate with the largest number of votes was declared the winner and the loser accepted defeat.  As witnessed, the tactics learned from Joseph Goebbels’ “Idiot’s Guide to Realizing an Authoritarian State” have proven effective in altering that landscape.

Citizens, enticed by a smorgasbord of conspiracy theories perpetuated by entrepreneurial propagandists have been tribalized into warring factions.  These agents peddle a fun-house reflection of reality, where verifiable truth is discarded for the comforting lie. These agents, and their fellow travelers, are trafficking in a future where the rule of law devolves into a cult of personality. These agents of fear fan the flames of resentment, creating an ‘us’ in opposition to ‘them,’ rending the sense of common purpose – idealizing civil insurrection – and appearing to desire a civil war.  Germany lay smoldering in ashes ten years, eight months, and one day after Hitler made the prediction of the thousand-year Reich.  One hopes for the sooner demise of Bannon’s.