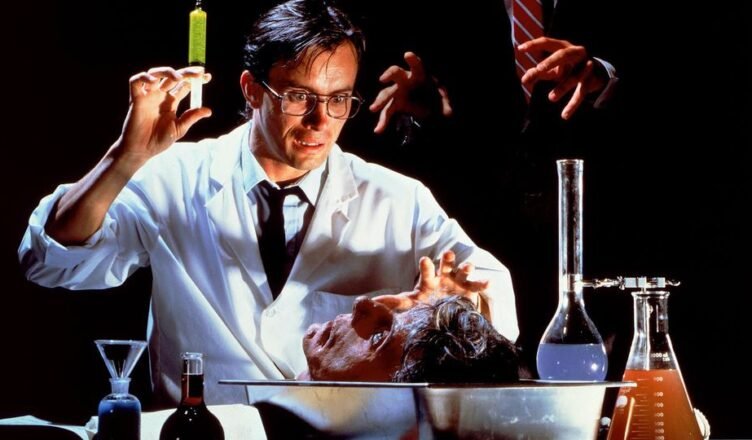 I was happy to see Popcorn Frights is screening Re-Animator at Silverspot Cinema in Coconut Creek, Saturday, July 17, at 9 pm. The 1985 horror flick is a fun B-movie classic that deserves to be seen in a group setting. But I was especially glad to learn about the screening because it gave me an excuse to pay tribute to the movie’s director, Stuart Gordon, who passed away last year when we were all consumed by the beginning of the COVID shutdown.

Back in 2003 Stuart Gordon was my directing teacher at the Los Angeles Film School. I’d taken acting classes, but never a directing class, especially not by someone who made movies I had actually seen like directing Fortress and writing Honey, I Shrunk the Kids. He didn’t have Steven Spielberg’s resume, but you can check out Stuart Gordon’s Wikipedia page, to see he worked with legendary talents like David Mamet and Dennis Hopper. So I was perhaps a little bit intimidated.

And Mr. Gordon didn’t do anything to put that intimidation at ease. He had kind of a gruff, no-nonsense presence. Perhaps it was his style of directing too? Don’t speak too much because when you talk your directions will have more meaning? I don’t know how effective it was on his film sets, but it worked in the classroom.

It was a film school so I went into the class expecting it to be all about composing and framing a shot, but in Stuart Gordon’s class directing a movie was all about working with the actors. Don’t stay glued to the monitor, pay attention to the scene. He was big on pre-production, rehearse the scene as much as you could before you film it.  It would give the actors time to work out all the kinks in blocking and delivering a line without making a full crew wait along with them to get it right

Pre-production was also about research for him. I was making a movie about a private investigator, so he encouraged us to cold call a PI and interview her.

But it was the way he suggested you direct an actor toward a performance that really stuck with me. If you want the actor to play the line angrier, don’t just say “be angrier” or “be more intense”, give them an action verb like “destroy him” or “blame her”. It’s hard for an actor to play an adjective, but an action anyone can play. I guess he took it from the Stanislavski method acting school, but it was eye-opening to me as a more precise way for a director to communicate what exactly they wanted.

When I did film my scenes I followed his directions to a t. It made the filming experience a whole lot more fun and rewarding for me, and hopefully for the actors too.

And at the end of the year when we screened our movies I saw Stuart Gordon in a whole new light, one that was completely in sync with someone who could be the mind behind a madcap movie like Re-Animator.

We were in the middle of our editing process, so the teachers were giving notes on how we could improve our movies. Mr. Gordon was giving insightful suggestions, but I couldn’t help but notice how intensely focused he was on the piece of paper on which he was writing his notes. I’m nosy, maybe it was a lesson from the interview with the private investigator that he encouraged, that spurred me to take a look at what was on the paper he was so focused on.  Was it thoughts he had about our movies? Nope. Was it ideas for a new screenplay? Not at all.

The lined paper was filled up and down with ornate drawings of skeletons.

R.I.P. Stuart Gordon. Thanks for the movies you left us.